Survival of the Fittest post Halving : Miners will have to evolve or surrender

According to one of the largest Bitcoin mining pools on the market, Poolin, Bitcoin’s upcoming halving could shut down at least a sixth of its miners.

With the halving set to happen in less than two weeks, the crypto industry has been rife with discussions on how the monumental event will affect the lifeblood of the market—the miners. While predictions vary greatly, with many fighting on whether or not the halving has already been priced in, the one thing almost everyone agrees on is the fact that Bitcoin’s hashrate is going to be hit extremely hard once the halving comes.

Alejandro De La Torre, the editor of Poolin, said that the hashrate is going to drop significantly when the block subsidy gets cut in half. However, the question of exactly how much hashrate will come offline once the halving comes still remains.

To get a rough estimate, Poolin broke down its hashrate distribution so it can determine which miners have the highest risk of shutting down. The report divided the lower quartile of Poolin.com’s total hashrate into two-terrahash intervals, with the sections of the pie chart below representing the percentages of the total output for each range. 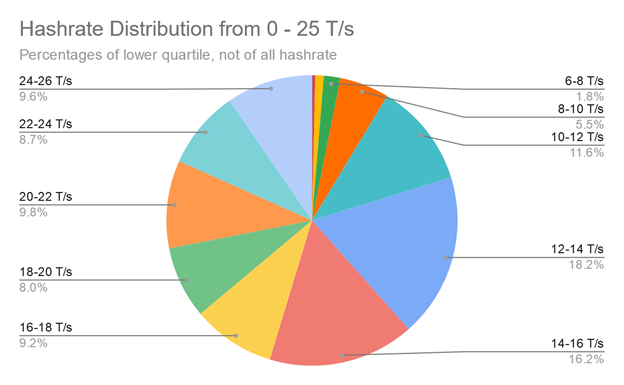 Hashrate distribution in the lower quartile of Poolin.com.  (Source: Medium)

The reason why the report looked only at the lowest quartile of the hashrate is that they determined it was the highest risk area where miners’ profit margins were the tightest. Most of the miners operating in the 0-25 T/s range use 16nm and 10nm chips, which Poolin estimates will most likely capitulate once the block rewards are slashed in half.

“The most popular miner that was sold in the last four years was Bitmain’s S9, of which there are many versions, but they fall between 12–22 T/s,” the report explained.

This is why Poolin estimated that miners in this range account for approximately between 15% and 30% of the overall hashrate on the Bitcoin network. It is expected that most of these miners will shut down after the halving, as it will become increasingly difficult for them to maintain even the thinnest profit margins.

By comparing the break-even prices of miners across the lower quartile, Poolin was able to determine at what prices the older miners still in use will no longer be profitable. The report assumed that the price of Bitcoin was around $7,000 and the difficulty stood at its last week’s average of 15.8 T. 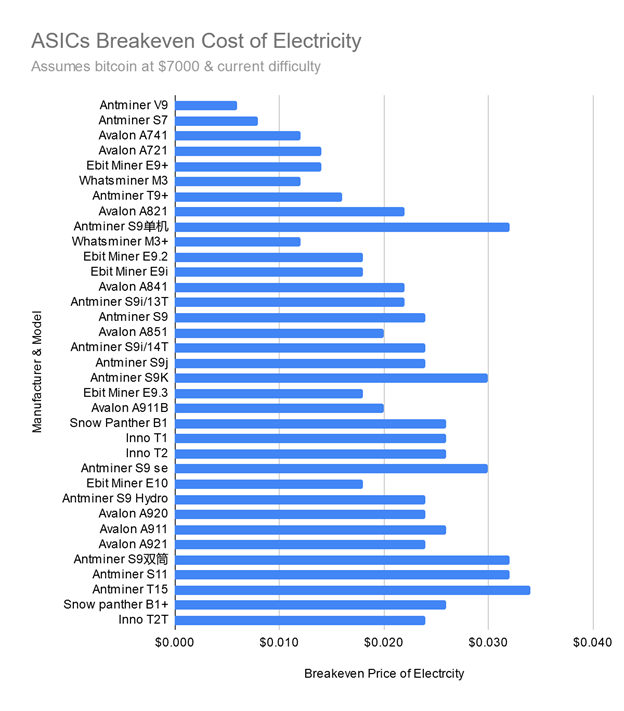 According to the chart, the highest price any of these miners can pay for electricity and still remain profitable is 3.4 cents per kWh. Those in the lowest ranges between 0 and 10 T/s will all be leaving unless the electricity they use essentially becomes free.

The only miner that would be able to barely break even is the Antminer S9K, operating in the 10-16 T/s range, which provides 46% of all the hashpower in Poolin’s lower quartile. However, this means that all of those miners will need to mine below 2 cents per kWh in order to remain profitable after the halving, a feat that will be impossible for many.

Miners in the 16-16 T/s range may be able to remain profitable a little longer after the difficulty adjusts downward with more breakeven prices between 3 and 3.5 cents per kWh, but they too will be operating on razor-thin margins. Poolin estimates that less than 15% of the lower quartile will remain.

“The upcoming and final difficulty adjustment with the 12.5 BTC block subsidy will occur one week before the halving (1008 blocks), and the difficulty is projected to increase. We expect that the first 1008 blocks after the halving will be mined slowly as huge numbers of unprofitable miners drop off the network. We estimate closer to 30% will be squeezed considering that the first 1008 blocks will have the pre-halving difficulty, but half the reward,” the company concluded in the report.