Hive (HIVE), the recently created token that spun off from decentralized content platform Steemit (STEEM), has seen its value skyrocket after being listed on a major crypto exchange. Last week, Singapore-based exchange Huobi listed the HIVE token on its platform, causing its value to increase almost six times and pushing its volume up.

According to data from crypto tracker CoinMarketCap, HIVE saw its price increase by more than 660%—rising from $0.11 on Apr. 22 to $0.84 on Apr. 27. As of Apr. 27, HIVE’s market cap stands at $223,880,318. This means that HIVE is currently ranked 36th among all the cryptocurrencies according to their market capitalization. 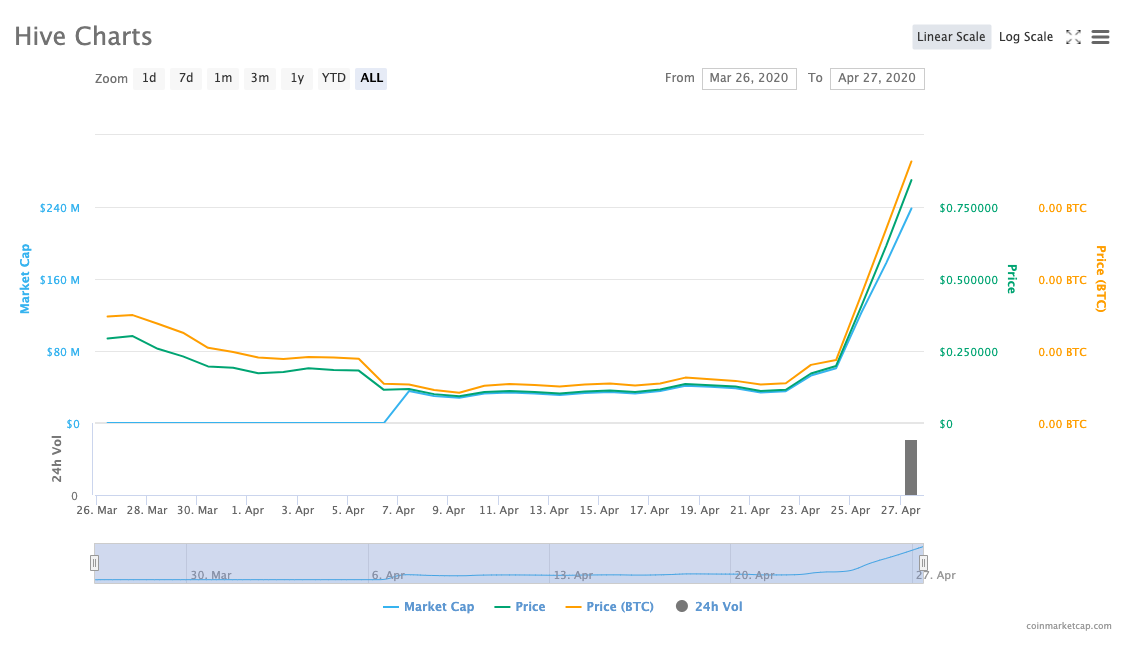 Aside from a huge push in value, the listing on Huobi also pushed HIVE’s trading volume through the rough. According to data from CoinMarketCap, the coin, which is less than one month old, has recorded a trading volume of over $161 million in the past 24 hours. Over 80% of HIVE trading happens on Huobi, with the exchange’s data showing that over $129 million worth of HIVE tokens were traded in the past 24 hours.

HIVE is also the third most-traded token on Huobi and is outranked only by BTC/USD and ETH/USD trading pairs. More than 9% of all the trading volume on Huobi currently comes from HIVE/USD.

Table ranking the pairs on Huobi exchange by trading volume

The huge spike in price and trading volume HIVE has seen shows that the formerly tight-knit Steemit community was eager to get rid of the centralized control of the platform that ensued after it was purchased by Tron. After Tron acquired Steemit, the majority of Steem’s witnesses, which are entities tasked with making decisions about the blockchain’s governance, initiated a soft fork that further censored the stake held by Steemit until either Justin Sun or Tron provided more details about their plans for the platform.

This caused the Steemit community to rebel and unite in order to regain control of the network by successfully launching the hard fork of the network—Hive.

Steem (STEEM), the in-house token for the Steemit platform, has seen its price spike during the weekend as well, rising by more than 35% in a single day. However, despite the steep growth, the coin’s price is still a long way behind the relatively new HIVE.

With a market capitalization of $83,940,776, as per CoinMarketCap data, STEEM stands way below HIVE, which has a 2,6x larger market share with over $223 million. STEEM is also the 61st largest cryptocurrency by this metric. 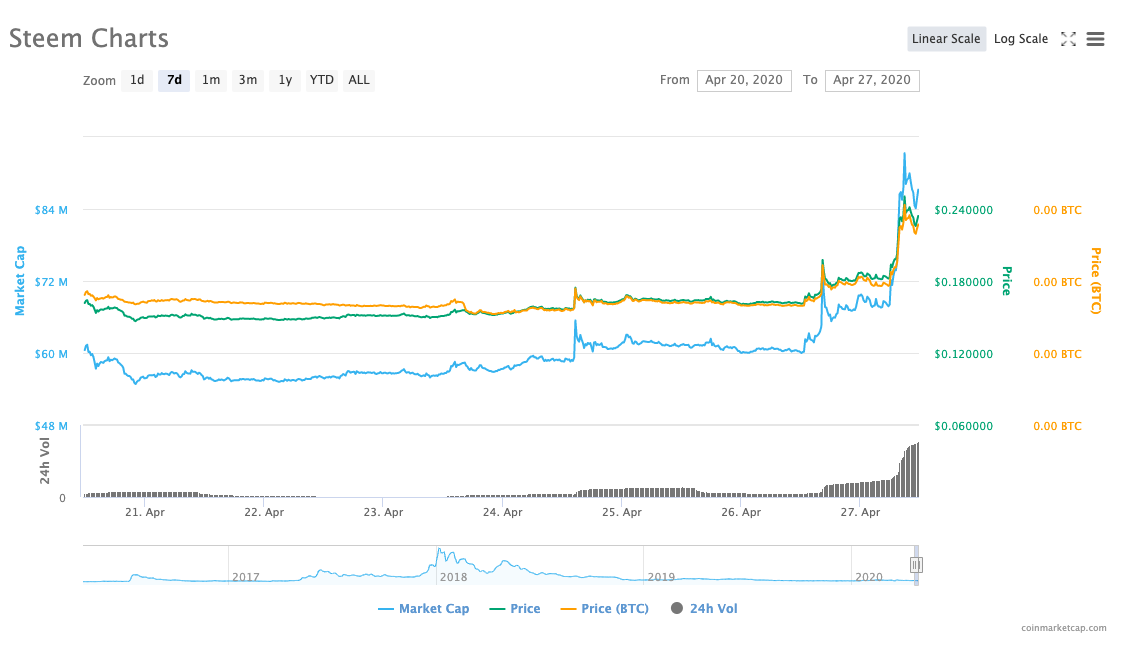 The Huobi listing also doesn’t seem to bother either the developers working on Hive nor the newly formed Hive community. Namely, Huobi was one of the few exchanges that participated in the so-called “takeover” of Steemit that caused a massive scandal at the end of February.

Huobi, alongside Binance, Poloniex, and Tron, was one of the largest holders of Steem (STEEM) tokens, which gave it a huge chunk of the voting power in the platform’s governance system. The exchanges all used their voting power to put the entire control of the Steem blockchain into the hands of a single user—@dev365—which many suspected was owned by Justin Sun, the founder and CEO of Tron.

Andrew Levine, Steemit’s former head of communications, said in an interview that he had no problem with Hive being listed on the exchanges that effectively colluded against the decentralization of the platform, as it allowed more users to access and trade the coin.

With Binance also announcing earlier today that they will begin listing HIVE, it’s safe to say that the token might see another major surge in trading volume. We are yet to see how this affects STEEM and whether or not the coin sees further growth riding on the wave of HIVE’s new popularity among both traders and former Steemit community members.