For the past decade, Bitcoin has been almost synonymous with the word decentralization. With no single entity governing the world’s largest and most valuable cryptocurrency, many saw it as the best way to keep their investments safe from market downturns and fiat currency devaluation.

But, no matter how secure a network was made to be, it still needs constant maintenance, touch-ups, and even large updates. So, who is responsible for doing that to Bitcoin?

This is the question that BitMEX Research sought out to answer in its latest report, where it analyzed the funds used to finance open-source Bitcoin development. Unsurprisingly, the report found that dozens of different companies and other entities put relentless work into Bitcoin development, further cementing the decentralized principles it’s based on.

Another interesting finding that has come out of BitMEX’s report is that Bitcoin development funding is the best that it’s ever been. The report found that the transparency, the availability of finance, and the degree of distribution among financial backers is more healthy than it has been in the past.

It analyzed publicly available information and spoke to individuals directly involved with Bitcoin development in order to compile data that provides a comprehensive picture of open-source Bitcoin developer funding produced to date.

According to BitMEX, the first part of the report identified the largest organizations that have directly funded open-source Bitcoin development. The compiled data revealed that the companies that have poured the most resources into the publicly available Bitcoin code are Blockstream and Lightning Labs. The two both have eight developers working on open-source Bitcoin code and are followed closely by Square Crypto with seven developers. The MIT Digital Currency Initiative has six developers working on Bitcoin, as do Chaincode and Purse. 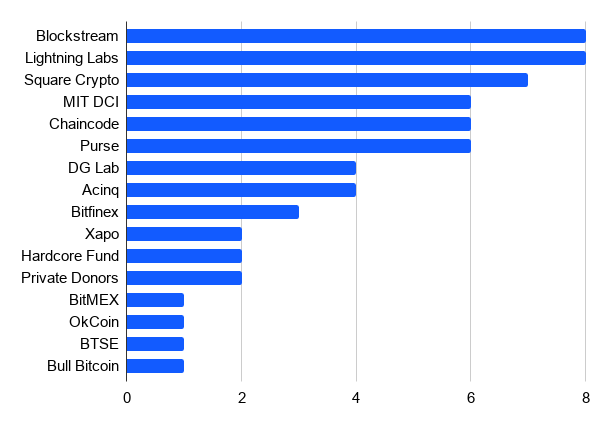 To get a better understanding of the work being put into developing Bitcoin, the report took a look at other data, too. The second part of BitMEX’s report used a bottom-up methodology to analyze the development of Bitcoin Core.

The company identified the top 33 contributors to Bitcoin Core by an all-time number of commits and then gathered data that showed where each one of them was getting their funding. Surprisingly enough, BitMEX’s data showed that the largest number of Bitcoin Core developers were independently funded. With no large company or other centralized entity behind them, most of them seem to be funding their own work.

Blockstream, which had the largest number of in-house developers working on Bitcoin, has funded only three developers, while MIT DCI, DG Labs, Square Crypto, and Hardcore Fund have all funded two developers each. 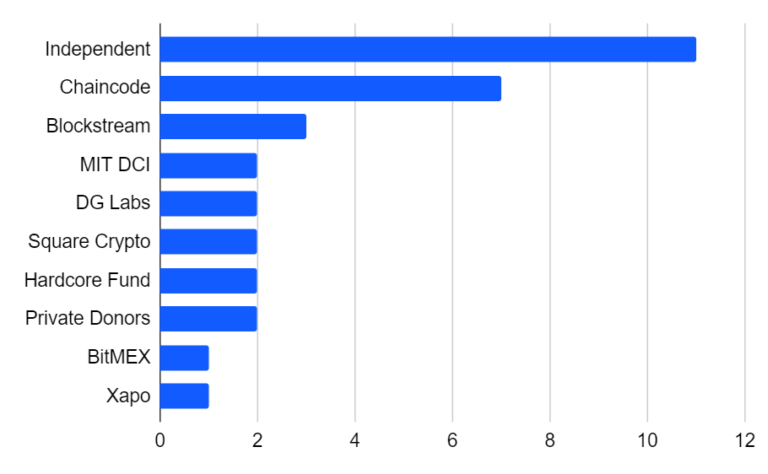 The report found that the Bitcoin ecosystem was in a “reasonably strong situation” with respect to developer funding. Funding is also far more distributed than it has been in the past, especially when it comes to the 2012-2014 period when the only significant funder was The Bitcoin Foundation.