One of the largest Bitcoin mining hardware manufacturers in China, Canaan, has appointed four new members into its board of directors, according to an official statement from the company. And while new additions to an already large board of directors aren’t anything new, especially for a company of Canaan’s size, the move has made headlines due to the ongoing controversy within the company.

In an official filing with the U.S. Securities and Exchange Commission (SEC), Canaan announced that the terms of Kong Jianping and Sun Qifeng have expired on Jul. 31. The two were the company’s official directors, while three other “independent directors,” Zhang Hong, Yang Xiaohu, and Luo Mei, saw their contracts expire on Aug. 1.

“All the departing directors will not seek appointments nor stand for elections to the board of directors of the company following the expiration of their respective terms of office,” the official statement said.

The five departing members have been replaced by four other “independent directors” to the board, effective Aug. 1. Canaan has appointed Zhang Wenjun, Du HongChao, Shu Zhitang, and Zhang Yaping.

While the official SEC filing didn’t provide any further details on the new directors, it did state that Canaan’s board of directors will now consist of six members—four independent directors and two other members. As 8BTC reported earlier in July, Canaan’s official page in the Chinese business registry now lists Zhang Nangeng, the founder of Canaan, as the company’s director and legal representative. Despite not being officially confirmed information, we can assume that the remaining member of Canaan’s board of directors is Meng Lu, who was named the company’s “supervisor” last month in what many have described as a power grab.

Namely, Zhang and several directors from Canaan’s Beijing office went to Hangzhou in late June to take the official seal and the business license of the company. By obtaining control over the documents, they were able to gain majority control over the company and remove many of the higher-up managers in the Hangzhou office. The event reportedly escalated and ended up with Canaan’s Hangzhou employees calling the police. No further information about the incident was revealed.

At the time, records from the Chinese business registry showed that Tu Songhua, Li Jiaxuan, Sun Qifend, and Kong Jianping have all been erased from the company’s listing. In a statement to the Daily Economic News, Kong said that he wasn’t familiar with the situation that has been widely reported in local Chinese media.

With all of the above-mentioned board members now officially relieved from their position, the situation within Canaan has become even more confusing. None of the former directors have commented on the issue as of press time.

The news about the new additions to Canaan’s board has resulted in an upward movement of the company’s stock. According to NASDAQ, CAN has jumped 9.6% to $2.74 per share right after the news about the board member cleanup was published. 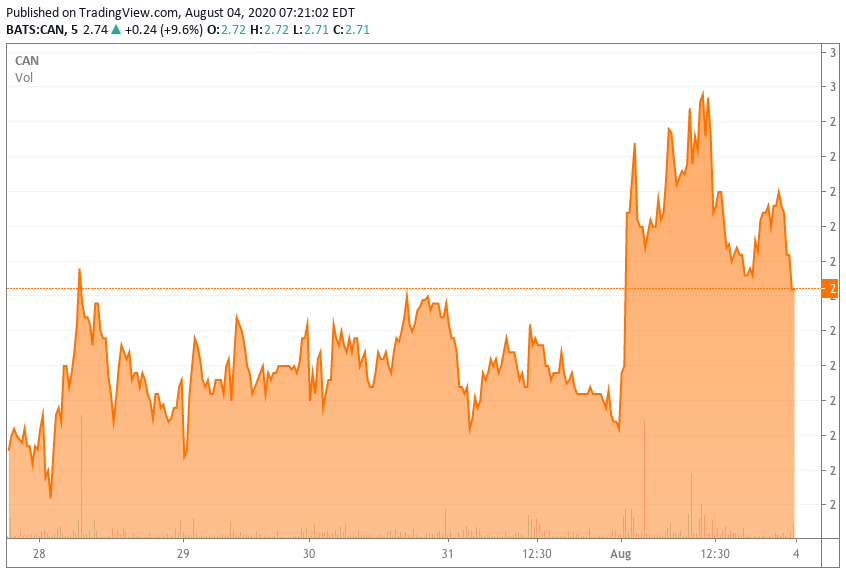 Graph showing the price of CAN stock from Jul. 28 to Aug. 4.  (Source: TradingView)