After taking a huge hit last month, the crypto industry seems on its way to recover from losing $70 billion from its market cap. Entering the second half of April, Bitcoin has been retesting the resistance set at the end of March, struggling to break the $7,000 for longer than a few hours.

And while the increased volatility Bitcoin has seen might indicate that traders have been going wild on crypto exchanges, the latest data from Glassnode points to a much different reality.

Namely, analyzing the publicly available data that shows the Bitcoin holdings from various cryptocurrency exchanges showed that there has been a drastic decline in their balance since the end of March. 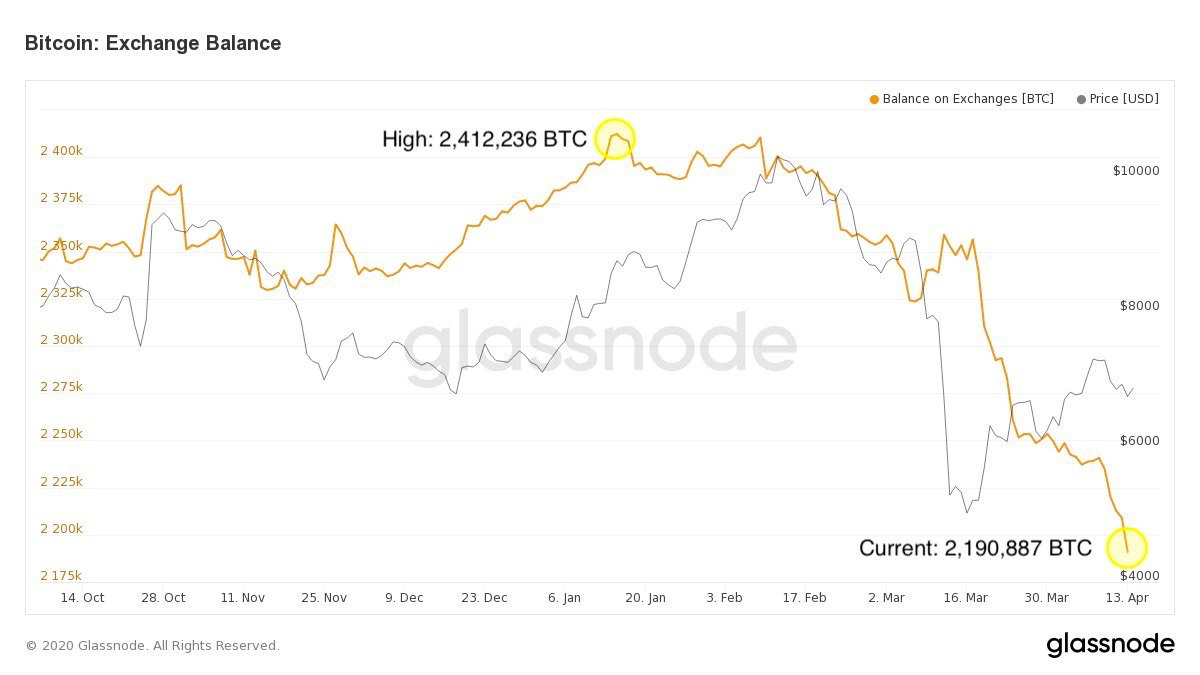 The drop, which seems to have gotten incredibly steep in the past few days, began in mid-March when the overall Bitcoin balance on exchanges began dropping from around 2.35 million BTC.

According to Glassnode’s data, the current Bitcoin balance on exchanges is 2.19 million BTC. While this isn’t a drop that’s to be ignored, as it represents a 6.8% decline in the overall balance, it pales in comparison to this year’s high recorded in January, when there were 2.4 million BTC held on exchanges.

The company believes this 10% drop from the January highs illustrates a shift away from day-trading for many cryptocurrency investors. As the amount of bitcoins withdrawn from exchanges keeps rising, it could indicate that more investors are turning to long-term holding strategies.

When taking into consideration the current economic climate and the overall state of the crypto market, this doesn’t come as that much of a surprise.

Earlier in March, 8BTC reported on the then-emerging trend of increased exchange withdrawals. Back then, it was unclear whether the huge balance movement came as a result of whales moving large amounts of Bitcoin or a large number of smaller holders withdrawing their funds. Nonetheless, the move was seen as incredibly bullish for Bitcoin, as more people are believed to be seeing Bitcoin as a store of value and a hedge against depreciating fiat currencies.

This could indicate that there has been an uptick in people that see Bitcoin as a store of value, and not a speculative asset. To increase security and avoid the temptation to sell, Bitcoin holders could be moving their funds to personal wallets to wait out for a new bull run analysts are predicting will happen soon.

Bitcoin’s impending block reward halving, which is expected to have a massive impact on its price in the long-term, could also be the reason why more and more people are withdrawing the coin.

A significant number of both amateur and professional traders that have bought Bitcoin’s mid-March dip could be moving their funds to more secure wallets as they’re anticipating a bull run that could lift its price up and introduce some much-needed stability.