China’s crackdown on Bitcoin mining within the country has affected much more than just Bitcoin’s price. After the local government in China’s Sichuan province issued a notice ordering 26 large Bitcoin mining farms to leave the area, the world’s largest cryptocurrency took a heavy hit and dropped to as low as $29,000. The overall crackdown on mining began earlier in May when rumors of an impending ban began circulating around Chinese social media. This led many miners to consider either moving their operations to other Chinese provinces or even abroad months before an actual executive order was issued.

The clampdown on mining in Sichuan was a result of the province’s need to curb energy usage to meet the guidelines issued by the central government. With the region relying mostly on cheap hydropower during the rainy summer season, the miner exodus has already affected the region’s hydropower industry.

According to a report from the South China Morning Post, there has been a significant increase in the number of small hydropower plants for sale in the past several weeks. The number of advertisements on Xianyu, a popular second-hand e-commerce platform owned by Alibaba, has seen a steady increase since May. Most of the plants put on sale are located in the Sichuan province, with almost all of them falling under the category of “small scale hydro plants” with a capacity of around 50 megawatts.

One of the sellers that have posted advertisements on Xianyu told SCMP reporters that buying a hydro plant will allow the prospective owner to mine cryptocurrencies in secret. Another seller explained that operators of some hydropower stations have turned to mining cryptocurrencies because they haven’t received permission from the government and environmental protection agencies to connect to the power grid. If they aren’t registered with local authorities as mining farms and consume most of the energy they produce, they might be able to stay under the radar and operate. 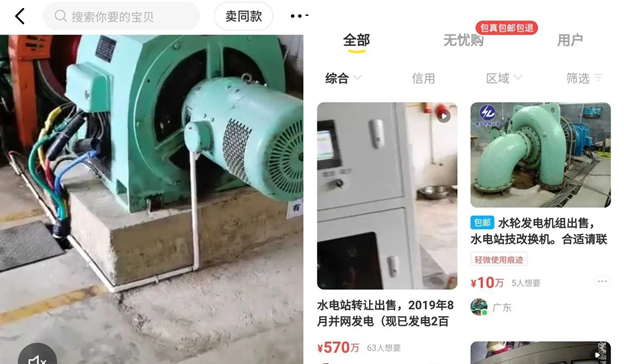 Screengrab showing a hydropower plan on sale on a second-hand marketplace. The seller of the plant represented in the picture said it was not involved in mining cryptocurrencies

And while some sellers said that their listings were unrelated to the recent crackdown, several people confirmed to SCMP that their power stations were listed on the market because of the platform. One source noted that the increase in the number of listings has also pushed the prices of hydropower plants down in recent weeks.

China’s Sichuan province isn’t the only cryptocurrency mining hub in the country. However, non of the other mining hotspots have seen a similar effect on their local industry—Inner Mongolia and Xinjiang provinces both rely on coal power. Cracking down on mining in these regions hasn’t put any additional pressure on coal power plants, as they’re mostly large-scale plants connected to the larger regional grid. The regions have also received much looser carbon-neutrality goals than Sichuan.