Did Satoshi Nakamoto Move His Coins? Bitcoins Mined in 2009 Moved

50 Bitcoins which were the block reward of block 3654 mined in February 2009 were moved today. The news brought frenzy into the market with many speculating it was Satoshi Nakamoto—the anonymous creator of Bitcoin who has moved his coins.

The markets did not react positively to the news, with fear and uncertainty taking over. The price of Bitcoin dropped 4% within hours of the news and other altcoins saw a significant dip as well.

Bitcoin price dipped quickly after markets reacted to the news

Bitcoin community has largely accepted that Satoshi Nakamoto has left for good and that’s a crucial part of the equation which makes Bitcoin truly decentralized. Bitcoin enjoys a privilege of its narrative not being controlled by a single person like Vitalik for Ethereum or Justin Sun for Tron. Many fear, this might not be the case if Satoshi Nakamoto returns.

Another reason traders and the community fear Satoshi’s return is economic. Estimates indicate that Satoshi mined nearly 1 million bitcoins. With him triggering a sell-off of 1 million BTC which is worth nearly $9.5 billion would wipe out the entire liquidity of the markets and crash the price of bitcoin beyond repair.

It would be unfair to assume that it was only Satoshi who was mining Bitcoins in February 2009. Many early adopters believe there were multiple miners mining at that time like Bitcoin pioneer Hal Finney who was mining bitcoins in 2009.

“Here’s a visualization of the Patoshi pattern with the block that was just spent. The blocks believed to be Satoshi have a specific pattern in the nonce, which this block does not have.” 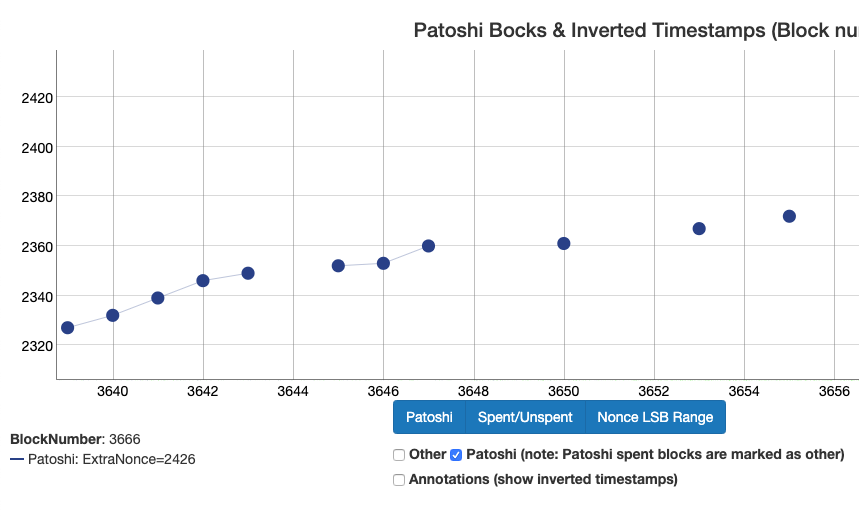 Such movement of old bitcoins is indeed rare. Last time coins from 2009 moved was in 2017. But such movements have happened earlier in 2017 and multiple times in 2015. The value appears to be constantly 50 Bitcoins for each transaction because initially, the block reward was 50 Bitcoins for mining a block which was recently reduced to 6.25 Bitcoins after the third halving,

Movement of Bitcoins mined in 2009

The odds are that Satoshi is not back. But we can’t be too sure.