While last month is largely considered to be the worst month the crypto market has seen since the 2017 crash, not all metrics point to the demise of the industry. According to the latest data from Dune Analytics, non-custodial exchanges on Ethereum have seen a massive rise in trading volume, a trend that many believe indicates the market is becoming more mature.

As per the company’s analysis, trading volumes on decentralized exchanges (DEXs) reached an all-time high of $688 million in March. This number, while small when compared to the volumes seen on some of the bigger centralized exchanges, is a significant increase for the relatively young DEX market. Last month’s volume represents a 53% increase from the last ATH recorded in February 2020.

Another interesting takeaway from Dune’s data is the fact that this is the first time that trading volumes on decentralized exchanges have soared while Ethereum’s price has been spiraling down. Every other time DEX trading volumes saw an increase, ether’s price (ETH) has been on an upward trajectory. A drop in ETH’s price has, until now, always caused a drop in trading volumes. 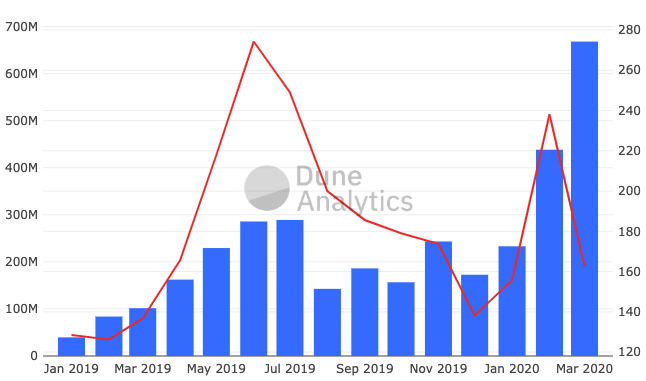 Diving further into Dune’s data reveals other trends in the DEX market.

The decentralized exchange with the biggest market share in the past 24 hours has been 0x. With 27.8% of all trades on non-custodial platforms, 0x is followed closely by Kyber, which was responsible for 25.6% of all trades between Mar. 31 and Apr. 1. 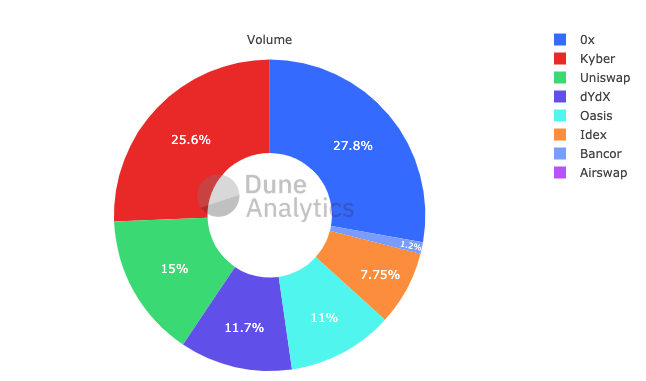 Zooming out to a 7-day average shows two other exchanges leading the way. According to Dune Analytics’ data, dYdX and Uniswap have accounted for the biggest percentage of trading volume in the past week – dYdX saw over $40 million traded on its platform, which represented 34% of the total volume. Uniswap came in second with a 15.88% market share and around $18.3 million traded, and was followed closely by Kyber with $17.6 million traded and a 15.26% market share. 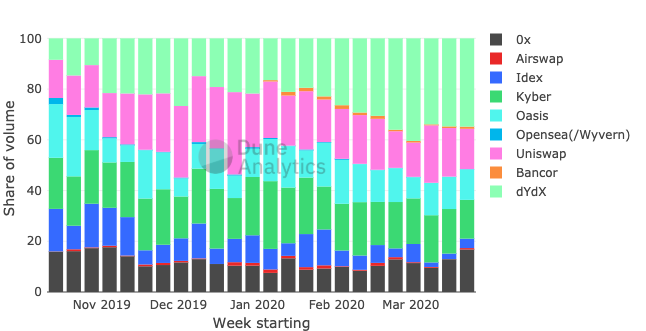 As the total USD trading volume across all DEXs reached $2.3 billion last year, this month’s number alone shows that the market has seen a huge increase in interest in non-custodial exchanges.

This shows that what once was a niche market targeting the security-conscious among traders, has now become one of the fastest-growing market segments. Dune Analytics pointed out that the soaring volumes might show that non-custodial exchanges are on their way to solving real problems on the market.

While there’s still a long way before decentralized exchanges reach the volumes of industry giants such as Binance, which recorded over $151 billion in trading volume in the past month according to CoinMarketCap, we expect the category to show an even better performance throughout the year.