As Bitcoin has now crossed the $9,000 mark and is hovering around $9,200 at press time, many saw this as a clear sign that the world’s largest cryptocurrency has entered its pre-halving bull run. While it’s still too early to tell whether this will be the case with the latest price spike, there were certain metrics that pointed to its latest rally.

Bitcoin’s price has previously been compared with a wide variety of different assets and metrics in order to find at least some correlation that could enable better future predictions. While some compared its performance to gold, others used more general metrics, such as the S&P 500 index, to compare performances.

However, it might be another digital asset that actually points to future price spikes. According to data from cryptocurrency monitoring company Santiment, Bitcoin’s movements in the past three months seemed to correlate with the total supply of USDT, Tether’s USD-tied stablecoin, kept on exchanges.

Santiment’s data showed that at the beginning of February, when Bitcoin was trading at around $9,500, the amount of USDT held across various exchanges was relatively low—USDT represented around 18% of the total supply on cryptocurrency exchanges.

Graph showing the correlation between USDT supply on exchanges and the price of Bitcoin. (Source: Santiment)

However, as February went by, the amount of USDT held on crypto exchanges began to show signs of major growth, eventually reaching a three-month high right around when the first half of March ended.

“As this chart clearly indicates, there is an inverse correlation between Bitcoin’s price and USDT’s supply on exchanges,” Santiment concluded.

The company explained that the downward trend USDT supply entered at the end of April could indicate that another push for $9,000 could be made.

This ATH happened just after Black Thursday, when both the stock market and the crypto market took massive hits erasing tens of billions from their market cap. Bitcoin itself saw almost half of its value wiped out within hours of the crash, as stock market drops ignited sell offs across the crypto markets.

One possible explanation is that most of the Bitcoin lost that day wasn’t liquidated in fiat, but rather in USDT. Traders could have flocked to the safety of a stablecoin when the market got rough—it’s much faster and easier to exchange cryptocurrencies for cryptocurrencies.

Traders could have also anticipated a price rebound, deciding to keep their USDT on exchanges instead of transferring them to wallets so that they can quickly exchange it for Bitcoin once they sense an incoming rally.

While this isn’t the first time USDT has been linked to Bitcoin’s price, this is the first time it’s total supply on exchanges was seen as an indicator of bull runs.

Santiment’s prediction was, in fact, correct—after the company published the data on Mar. 4, Bitcoin’s price surged more than 7%. And while hourly charts show that it has been struggling to break above $9,300, Bitcoin’s rally above $9,000 marks an important milestone for the market. We are yet to see whether it continues this upward trajectory until it reaches the $9,500 mark or it begins consolidating down to a more stable $9,000. 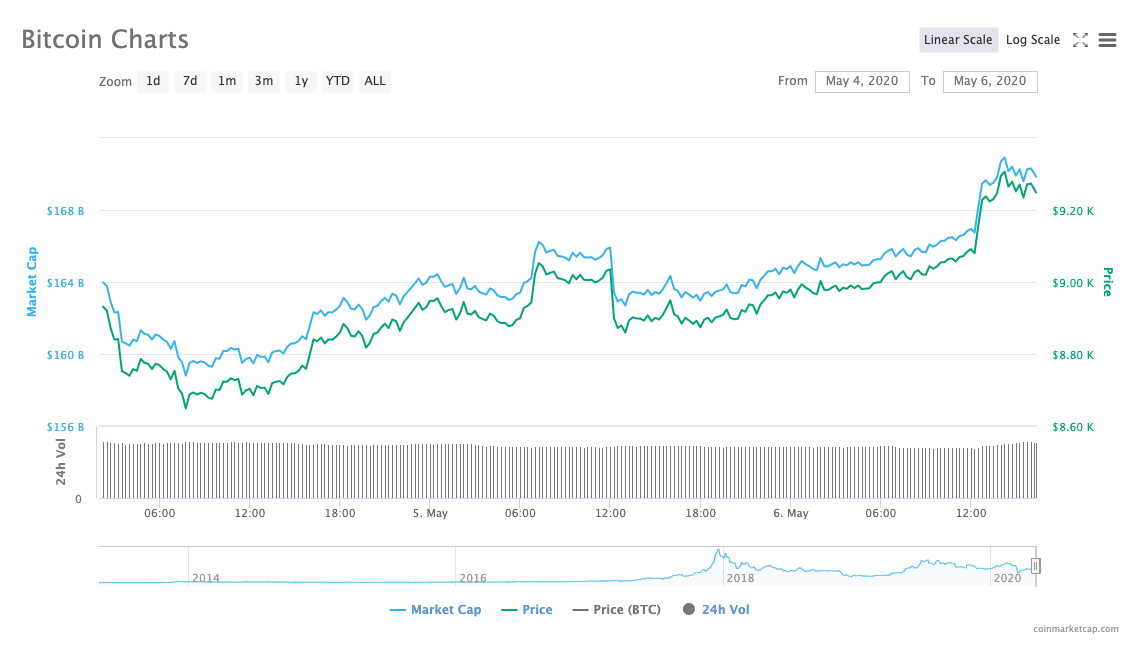 Bitcoin’s price from May 4 to May 6. (Source: CoinMarketCap)