Despite the massive state-wide effort to promote the development of blockchain technology, not every aspect of the crypto and blockchain industry in China is seeing the same rate of progress. While cryptocurrency ownership has been somewhat contested in China, the country managed to become the world’s biggest hub of cryptocurrency mining farms, mostly thanks to its excellent infrastructure and cheap electricity.

However, it seems that the mining industry has seen its heyday, as the latest reports coming from China show that the government has begun targeting miners.

According to a Weixin report published on Monday, numerous cryptocurrency miners across the country have seen their cards getting frozen over the past week. With access to their bank accounts and their funds revoked, the miners are already experiencing a slew of problems many think have the potential to bring the industry to its knees.

This, according to local media, is part of a broader crackdown on telecom fraud and other types of money laundering. Rightfully afraid of legal ramifications that might come with crypto ownership, many investors in China have cut back on fiat withdrawals and will most likely be keeping their funds in cryptocurrencies for the foreseeable future.

However, cryptocurrency miners are heavily reliant on fiat currencies and are one of the biggest providers of liquidity in the crypto industry—with a considerable overhead and electricity bills to pay, most miners exchange all of their cryptocurrencies for fiat.

An operator of a big mining farm in China, who requested to stay anonymous, told Weixin that the biggest headache for everyone, and by far the most difficult thing to do now is paying the electricity bills. His statement is in line with the overall sentiment in the industry—according to an anonymous online survey, 74% of miners said that the card freezing had the biggest impact on their ability to cover the cost of electricity. 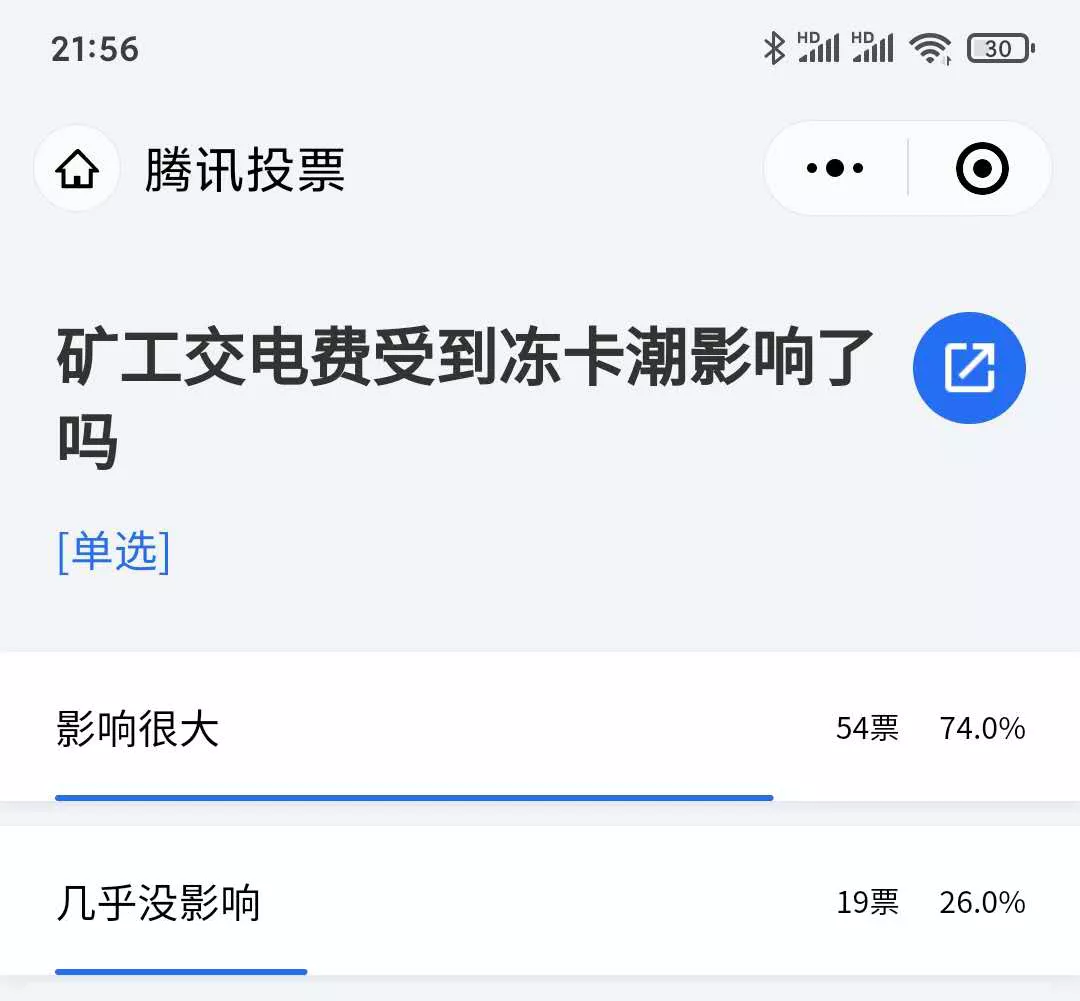 Screengrab showing the results of the online survey (Source: Weixin)

While it’s still unclear when the card freezing campaign began, some sources revealed that there is a significant number of miners that have been unable to cash out for a whole month. Aside from having their credit cards frozen and the access to their bank accounts revoked, the miners also saw many OTC providers that specialize in serving miners terminate their operations.

Sun Xiao, an OTC merchant, said that this is the first time he saw both banks and OTC providers cut off mining companies that have been in the business for almost a decade. He advised miners to be weary of QQ, WeChat, and Telegram groups offering them to cash out anonymously through USDT. Those short on cash should try to find a reliable counterparty to exchange cryptocurrencies for fiat, but should always keep records of all of the deals they made in case they get audited. All miners who saw access to their funds revoked should get in touch with both their banks and the third-party providers that were most likely tasked with freezing the accounts.