Qihu 360, the leading IT company in China, releases an annual report on the development of ransomware in China and predicts 10 times growth of potential victims or 50 million in 2017.

1. Individual and enterprise victims
Wenting released a weibo one week ago, warning the Bitcoin ransomware. Her tone was serious:

This is the second time our lab experienced extortion by Bitcoin ransomware. We paid around 10,000 RMB. Please spread the words to those who have lots of research data, especially those who are about to graduate.

The location of weibo indicates that she is earning her doctoral degree in the Institute of Hydrobiology of Chinese Academy of Sciences. Unfortunately the weibo was not reposted, not even once. Her voice was weak but she was not alone.
Last month, one of the top 10 threads in Peking University BBS  was a call for help from a victim of Bitcoin ransomware. The victim said he received an email in his PKU emailbox with a PDF attachment. He doubled click the file out of curiosity, then all of his files were locked. 3 bitcoins were demanded to decrypt the files and he was given a detailed instruction as below: 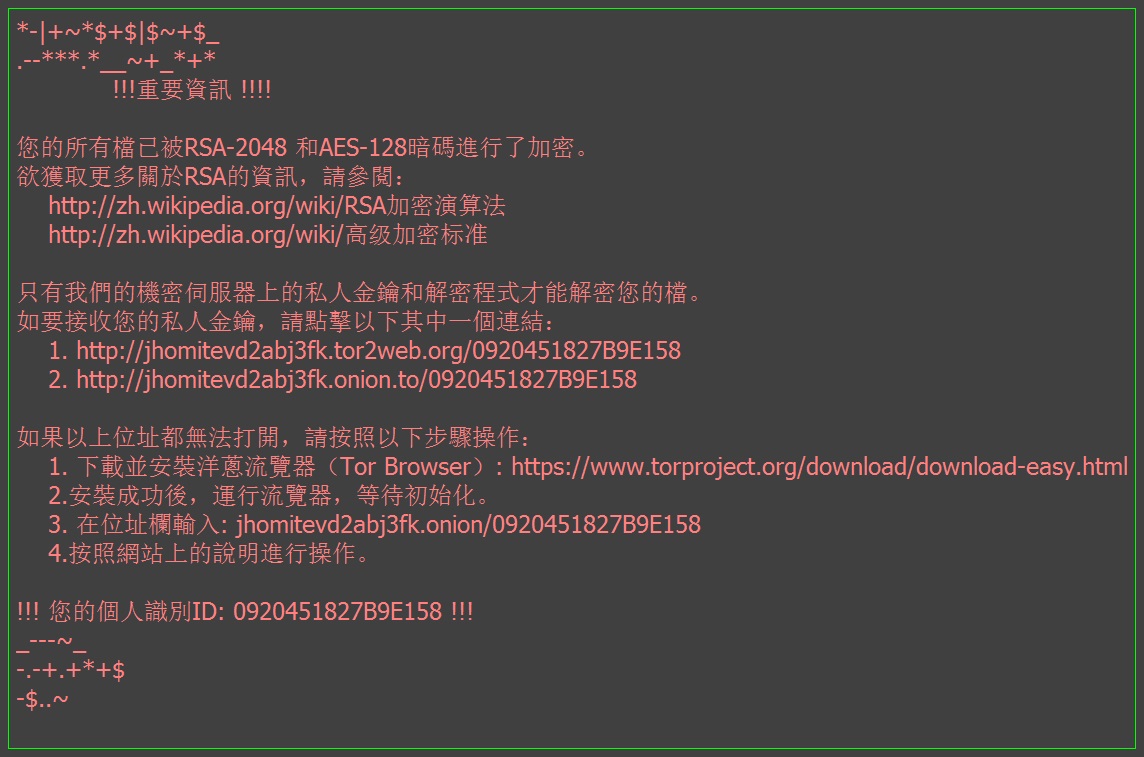 Obviously, the victim was seeking a free solution but he soon realized that he was left with only two options: to pay or to format. The decryption without private key is almost impossible. Comment from CharAznable is cold but realistic:

That depends on how much you value your data.

In fact the breakout of ransomware is so rampant that a municipal government has to release an official warning on taking precautionary measures against Bitcoin ransomware, as first disclosed on 8btc forum. Changzhou government released a warning against Bitcoin ransomware in November 2016

The notice on 4th Nov by Changzhou authority proposed 4 measures to prevent loss from bitcoin ransomware like web-surfing conduct, implementation of multi-level network security strategy, terminal protection and data backup and recovery.
It’s unusual for a regulatory authority to issue an official notice aiming for a specific virus, probably the first of its kind in China.

Ransomware is a denial-of-access attack that prevents computer users from accessing files since it is intractable to decrypt the files without the decryption key. Ransomware attacks are typically carried out using a Trojan that has a payload disguised as a legitimate file. -Wikipedia

On 15th December. 360 Internet Security Center released an annual report of 2016 China Ransomware. Some figures are listed below:

360 is the leading IT company in China, claiming to be the 1# internet security company in China with 600 million users, among which 1 million are enterprise accounts. The report soon became the source of many similar reports in China’s mainstream media.

3. Bitcoin payment is difficult for common users
The third chapter in the report is about bitcoin payment. A sample survey indicates that 11.9% victims choose to pay the ransom to recover files, among which 58.4% are paid via taobao, 33.3% by following ransomware instructions and the rest by resorting to friends.
However, not every payment attempt is successful. For those who seek payment via taboo, 92.9% of the victims eventually paid off successfully and recovered their files. Only 50% managed to pay via ransomware prompt instructions. The most unreliable means is through friends with zero success. In the end, 70.8% victims finally delivered the payment. That means bitcoin payment via self-education is not that easy.
As Bitcoin is a censored word on taobao, I searched “ransom “instead and found an individual shop that offers to decrypt files at the price of 3, 600 RMB. 77 user comments are mostly praising the shop-owner’s timely service even in mid-night.

The survey also reveals that the importance of data infected is the most important factor in choosing to pay or to format. The other three factors are monthly income, job position and related industry.

4. Alternative solution
At the end of the report, 360 offers to pay up to 200 bitcoin for enterprise users if they are infected.
To enter into the agreement, users must turn on the anti-ransom service as described below: As per service agreement, if users PC got infected under the protection of 360 service, 360 promises to pay up to 3 bitcoins for individual and 200 bitcoins for enterprise accounts.
Dr.Pei Zhiyong, the author of the annual report, points out that virus makers have to compete with technology advancements, finding loopholes to facilitate extensive propagation in the past. The more victims, the more profits they could make. But things have changed now with the combination of cryptography, Tor network and Bitcoin payment. These technologies are matures and easy to replicate. Bitcoin is the final link in the business model. Traditional virus must combat with anti-virus software to survive in the victim’s operation system. Now with one-time encryption, the victims have to delete the files or pay at least one Bitcoin, or 800 USD equivalent at today’s spot price. Such amount  could only be achieved with thousands of infected terminals in the past. The ransomware attacks from April to May 2016. Ransomware attack from August to November

6. Regulation
Earlier today, the Supreme People’s Court of China publicized an official interpretation on the telecom fraud and other criminal cases. Criminals who have committed frauds with value of more than 3,000 RMB of public and private property can be sentenced to less than 3 years imprisonment, 3 to 10 years imprisonment for 30,000 RMB and lifetime imprisonment for amount above 500,000 RMB.

Frauds committed via phishing site, trojan and network penetration is listed among the 10 scenarios that will receive severe punishment.

Bitcoin has two sides, just like any other coins in the history of mankind.