Chia, a decentralized storage network founded in 2017, has seen its popularity rise in China. The network, which offers a service similar to Filecoin, has launched its mainnet for mining on March 19th, fueling a renewed interest in the ambitious protocol.

Just like on Filecoin, mining on Chia consists of two steps—plotting and farming. Investors need to plot a minimal file size of 101 GB by using a hard drive, ideally a solid-state drive SSD. The SSD is used to read and write about 2 TB of data and then save the file’s final directory at a normal hard disk drive (HDD). This creates the plot that is used to farm XCH, the native cryptocurrency of the Chia platform.

This, coupled with the rising popularity of Chia, has led to a huge problem in the Chinese hard drive market. According to multiple reports from news outlets focusing on computer hardware, this has caused hard drives to increase in price. Data from Manmanbuy.com, a mobile app that tracks the historical prices of goods sold on e-commerce websites such as Taobao and JD.com, showed that the prices for multiple different models of hard drives have increased by as much as 100% since the beginning of April.

For example, Western Digital’s 12 TB hard drive has seen its price increase from 2,499 RMB, or around $372, to 3,599 RMB, or just over $537. The same device model costs around $347 on U.S. and European online retailers such as Amazon and eBay. Some enterprise-grade hard drives, such as the 12 TB model made by Seagate, have seen their price double in the past couple of days.

According to reports from BlockBeats and Time Finance, the information that has been circulating around Weibo and other social media sites insinuating that most hard drives used for Chia mining have been sold out are false. Sources from both news outlets believe that there are “plenty of hard drives on the market,” but that the HDD and SSD stock is being hoarded by sellers in order to inflate their prices.

However, the surge in popularity Chia has seen has certainly contributed to this. The Chia blockchain explorer has shown that since the mining mainnet launched in mid-March, the space allocated to the network increased by a factor of 4 to over 450 pebibytes (PiB) at press time. 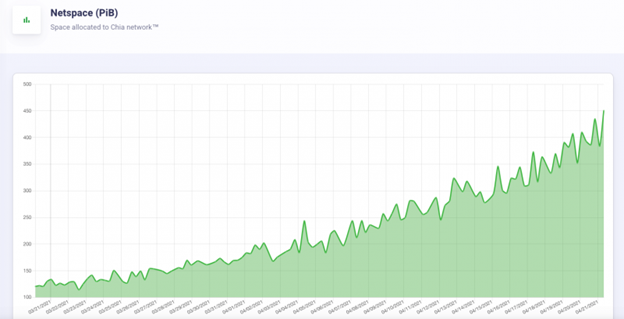 Screengrab showing the netspace for the Chia network