Litecoin founder has had to come out to defend his action on why he deleted a tweet about his cryptocurrency’s instamine phase saying it was meant to avoid any drama with a competing cryptocurrency, Dash.

Charlie Lee notes in response to several posts that the deletion had nothing to do with Litecoin being exposed as an instamine as it is “well known that Litecoin was fast mined in the first few days as the amount of people and hashrate was more than I thought there would be.”

The instamine argument borders on perceived discrepancies between block 3 and block 10,000 in which nearly 10,000 blocks were reportedly mined on the Litecoin network in 24 hours (the increased hashpower before difficulty adjustment better explained here). 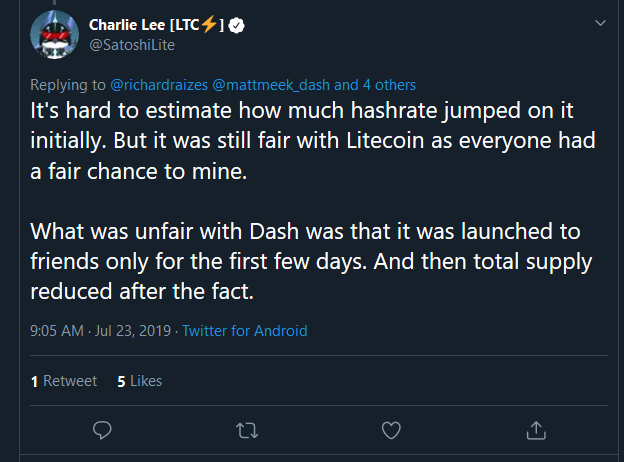 He explained that the launch eight years ago “was extremely fair” as “source code and binaries for all win/Linux/Mac were released days before launch” and “launch time was voted by the community”. This allowed thousands of people to join at the launch- with an equal chance to mine at the time – to fast mine some coins whose total amount “is less than 1% of the total supply today”.

Lee came under fire after deleting the tweet in which he dubbed the instamine phase of Dash as “unfair”. He has since clarified that it could be confusing to people who think instamine means that the developer team are doing fast mining rather it was a free for all process.

The setting of the record straight comes as the cryptocurrency dubbed the silver to Bitcoin’s gold is set to have its block reward halving in less than two weeks. His prompt response to the claim which has generated hundreds of comments on the Cryptocurrency thread of Reddit is to debunk its validity and its likely effect on the possibility of Litecoin becoming twice as rare.

Lee described the initial post as a “lynch mob” against him but its author advises him (Lee) to “reconsider some of the things that you have said about other crypto projects and be a bit more fair-minded when attacking others. You do act like a troll given the important position that you have in the crypto world. If you attack others, don’t be surprised that they attack you.”

On a Bitcoin Cash Reddit thread, the OP sought to shed light on why Dash supporters’ claim that their instamine is no problem because LTC had the same is false and Lee’s controversial tweet was meant to show Litecoin’s actual story. The writer cites Lee as the “first to do what many prior “alt-coin” creators neglected which attempted to make a coin with fair distribution, and a genuine difference to BTC” while maintaining that Dash was different.

Like Litecoin, the writer adds, the first part of the instamine for Dash (first called ‘dark coin’) was announced on Bitcointalk but the software provided for its launch did not exist or work for which its founder, Evan, apologized and promised a restart in the future. However, mining suddenly started on the network and Evan admitted he got a disproportionate amount of coins which he offered to ‘airdrop’ but later cancelled.