Siphoning in real-world data into complex blockchain networks has been a problem many companies in the industry have been trying to solve. Few, however, have managed to gain both the market share and the popularity of Chainlink, a decentralized oracle network based in the Cayman Islands.

The company provides secure oracles to some of the largest enterprises in the world, including Google, Oracle, and SWIFT. And now, BSN has become the latest major enterprise to employ Chainlink’s oracle.

First announced in a Jun.24 press release, the news about BSN’s involvement with Chainlink caused a stir in the crypto community, as many believed, albeit wrongly, that Chainlink found its way through to the Chinese government-operated blockchains.

BSN is not directly operated with the Chinese government, as it’s a privately owned blockchain consortium that consists of both private and government-supported blockchain enterprises. The State Information Center (SIC) of China is one of the members of BSN and was involved in establishing BSN along with China Mobile Communications Corporation, China UnionPay Co. Ltd., and Beijing Red Date Technology Co. Ltd.

The news about BSN’s integration with Chainlink is certainly a big one for both companies. Bringing Chainlink oracle functionality to the BSN network will enable governments and enterprises to incorporate validated real-world data into their BSN applications using Chainlink oracles via the IRITA interchain service hub. SNZ Pool, a professional proof-of-stake (PoS) operator will be running the nodes that support the entire operation, BSN said in its press release. 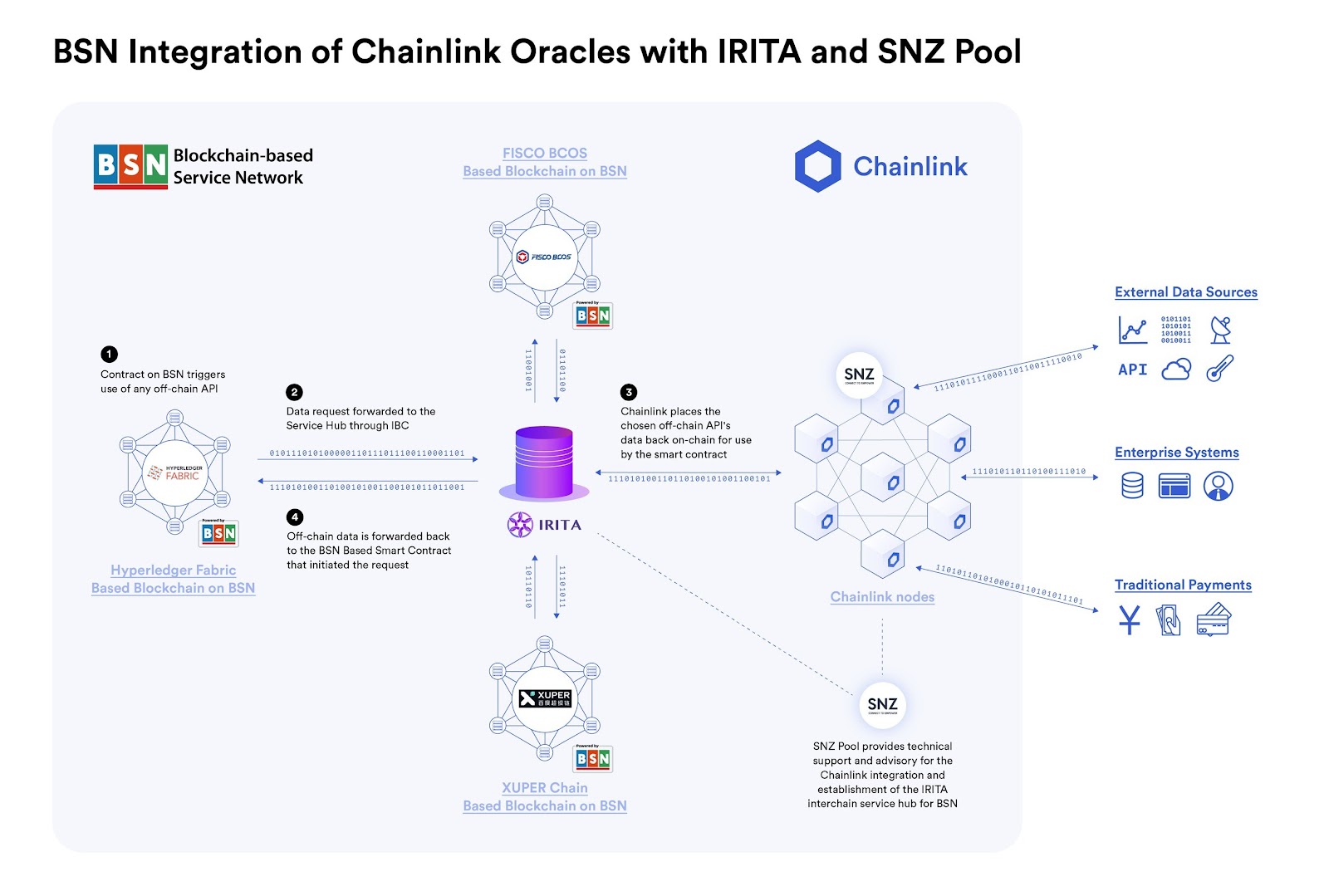 As part of this integration, Chainlink, IRITA, and SNZ Pool will be contributing to the fundamental development and growth of BSN. Chainlink, according to BSN’s release, will be integrated into BSN via a consortium blockchain product built using the Cosmos/IRIS SDK called IRITA.

It will be IRITA’s service hub that will allow blockchains in the BSN network to receive external off-chain data through Chainlink oracles, a feat that will be facilitated by SNZ Pool which will operate the nodes.

While it’s still uncertain when BSN will see the full functionality of Chainlink’s oracles, a working prototype is reportedly already underway. Yifan He, the CEO of Red Date Technology and the co-founder of BSN, said that the integration team plans on unveiling a working demo “soon.”

“One of the main purposes of BSN is to provide interoperability to all Dapps, regardless of whether they are for permissioned chains or public chains. On BSN, each Dapp should be able to call any other Dapps in a very convenient and low-cost way,” he said in the release.

Xiang Dai, the deputy secretary of the BSN Development Association and the director of planning and consultation with the China Mobile Group Design Institute, said that using Chainlink and IRISnet networks, all Dapps in the BSN ecosystem will be able to connect to trusted sources outside of BSN.

“We believe that this integration will transform blockchain applications and foster greater growth of the BSN ecosystem – in China and around the world,” he added.