Bleak Forecast for the Chinese Yuan Could Be Bullish for Bitcoin

The global geopolitical climate has been plagued with tension and uncertainty for well over a year. However, the outbreak of the COVID-19 virus that has pushed some of the largest economies in the world to their knees seems to have pushed the crisis into overdrive, with banks and analysts alike sharing a bleak outlook for the next several months. 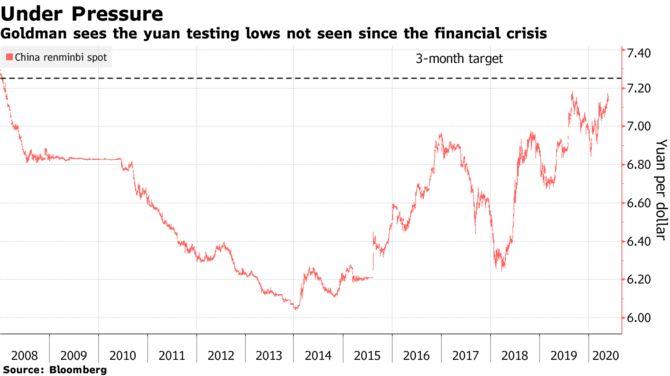 Goldman Sachs, one of the largest and most powerful banks in the U.S., was the latest institution to share its prediction for the economy, focusing mostly on the relationship between the U.S. dollar and the Chinese yuan. Namely, according to a recent report from Bloomberg, the bank believes that the yuan is set to fall in the next three months and reach the lowest level it has seen since 2008.

One of the bank’s main strategists, Zach Pandl, said in a May 31 note to investors that the disputes between the U.S. and China “cover a range of issues that are unlikely to be resolved soon. However, other authors of the note said that despite ongoing disputes, they don’t expect recent bilateral tensions to escalate to 2019 levels, with “spillovers to markets well beyond.”

This is due to the fact that the “retaliatory measures” imposed by the White House regarding the recent protests in Hong Kong “were mild and shouldn’t be considered a meaningful escalation,” Bloomberg reported.

The fact that the People’s Bank of China (PBoC), China’s central bank, has demonstrated some tolerance for gradual currency depreciation has forced Goldman Sachs to reevaluate its earlier prediction for the yuan.

The bank now sees the yuan falling to 7.25 per dollar on a three-month horizon before recovering toward 7.15 per dollar over six months and 7 per dollar in one-year. This is an increase from the targets Goldman previously posted about the yuan, predicting prices of 7.15, 7.05, and 6.90 per dollar.

A yuan with its value declining against the U.S. dollar has historically been rather bullish for Bitcoin. Dr. Garrick Hileman, the head of research at Blockchain, told Bloomberg that Chinese investors have previously bought Bitcoin as a hedge against escalating tensions in the U.S.-China trade war. When the yuan fell in 2019, traders in Asia were paying more for Bitcoin than elsewhere in the world, he said in the interview.

In August last year, the yuan fell below the 7 per dollar mark, causing Bitcoin to jump more than 7 percent on the same day. In 2016, the yuan closed the year with a loss of 7%—Bitcoin, on the other hand, saw its price increase by more than 125 percent during the time. Then again, in August 2015, Bitcoin saw its price jump by 25% after PBoC devalued the yuan by 3.5%.

With global-chaos due to the pandemic and money-printing in the USA might also end up highlighting the underlying instability of the nations making more room for Bitcoin which is governed by code. Chris Burniske, a partner at venture capital firm Placeholder, said last week that a prolonged weakening of the yuan could very well cause the 2015 and 2016 scenario to repeat itself.

If China's $CNY continues to weaken against $USD, then we could have a 2015 and 2016 repeat (pictured below), where $BTC strength coincided with yuan weakness. https://t.co/ISVJAZMX5O pic.twitter.com/VApfxe1SFw