Bitmain and Canaan have lost share of Bitcoin Mining Industry, but MicroBT is winning

With the eyes of the world pointed at Bitcoin’s price movements, many forget that there’s an entire, multi-billion dollar industry powering the world’s largest cryptocurrency quietly operating in the shadows—ASIC manufacturing.

Those in the business of producing Bitcoin mining hardware are waging their own battles right alongside the rest of the market, but tend to get forgotten every time a major market movement is recorded. This is both unfortunate and shortsighted. As ASIC manufacturers essentially produce the engines that run Bitcoin, even minor movements in the industry have the potential to cause a tsunami-like effect in the world of cryptocurrencies.

There are currently four main players in the ASIC manufacturing market— Canaan, Ebang, Bitmain, and MicroBT—all of whom have been analyzed in detail in the latest BitMEX Research piece. And while the report focused mainly on the energy efficiency of the mining machines each of the companies produced, the analysis provided an important glimpse into the struggles these companies share. It all began with the first ever ASIC chip, announced by a company called Butterfly Labs in June 2012. Butterfly Labs, however, wasn’t the first company to deliver the chip. Despite taking in tens of millions of dollars from preorders, the company never shipped any of its promised miners on time and was forced to close down in 2014.

This pattern of taking on more orders than can realistically be handled seems to prevail in the ASIC manufacturing industry, as almost every major player was guilty of it at some point.

Take, for example, Canaan. The first one to make it to the public markets, Canaan’s 2019 IPO was seen as an incredibly wise move at the time, with many seeing the company achieving great things in the future.

While the company is still one of the biggest players on the market, its shares are down 77% since the IPO. Canaan also generated a full year net loss of $149.8 million in 2019, while its net loss in Q1 2020 was $5.7 million. The huge losses were a direct consequence of significant inventory and prepayment write-downs, the same ailment that ultimately shut down Butterfly Labs six years ago.

“Going forward it may be challenging for the company to regain trust from investors following on from the write-down so shortly after the IPO,” BitMEX Research concluded, adding that the geo-political environment might also present a challenge to the company. 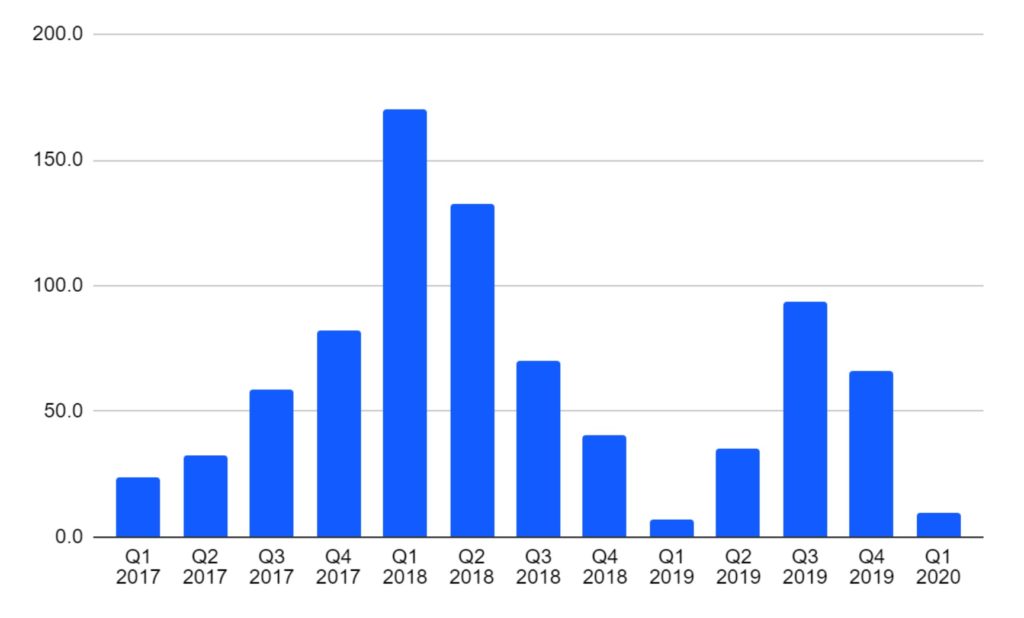 After its unsuccessful IPO in Hong Kong in 2018, Canaan’s competitor Ebang filed for an IPO in the U.S. in April this year in an attempt to capitalize on the rising interest in mining. However, Ebang seems to share most of Canaan’s problems, which include declining sales and inventory write-downs driving large losses. BitMEX’s report said that it will be difficult for Ebang to successfully pull off an IPO in the U.S.

In the battle for ASIC dominance, even the winning party seems to be faced with almost insurmountable obstacles. Bitmain, by far the largest ASIC manufacturer in terms of market share, also has an IPO on its agenda. The company’s effort to go public is, however, overshadowed by an internal power struggle that seems to bear more weight than the problems with its cash flow.

But, even before its founders began waging a war for control, Bitmain began losing its lead when it comes to energy-efficiency of its products. According to the latest report from Hurun, Bitmain is the 7th most valuable chip company in China with a value of RMB 30 billion.  The thing that keeps the company at the top are its powerful manufacturing capability and strong relationships with key players in the supply chain, which could be described as a sort of watered-down monopoly.

The only major ASIC manufacturer that hasn’t reported losses in the past few quarters is MicroBT. This could be a result of both its youth (the company was founded in 2017) and its consistency when it comes to launching products it promised. The company has a 100% track record with respect to tape-outs, with all 4 tape-outs resulting in products, and completed a $700 million financing round in January 2019. MicroBT was founded by Dr Yang Zuoxing who was previously Director of Design at Bitmain.

So, what does the future hold for these companies?

The entire industry has entered into a rough consolidation phase that shows no signs of stopping. This will eventually ravage the companies already struggling, making the most likely outcome that only two or three major players will survive in the long term.

And while this is certainly possible, it might take several years before any of these companies begin showing any signs of capitulation. Until then, we are set to see an even bloodier battle for turf begin, especially within China. With data showing that the mining farm operating industry is becoming increasingly concentrated, any one of these companies will make it a priority to establish exclusive partnerships with the handful of large, well-financed entities that engage in mining.

Aside from that, heavy investments in R&D will begin to show in the way these companies launch new products. We can expect companies to focus on increasing the lifespan of ASIC mining machines while keeping energy efficiency conservative, a move we’ve already seen with Bitmain and its latest Antminer S19 Pro.