The total computing power of the Bitcoin network took a massive hit this week when heavy rainfall in China’s Sichuan province forced many mining farms in the region to shut down. China’s southwestern province has been a hotspot for Bitcoin mining in the past several years, mostly thanks to the cheap electricity provided by the region’s hydroelectric power plants. Some experts have estimated that the ideal conditions have concentrated around half of all Bitcoin’s hashrate in Sichuan.

However, while many have criticized this mining pool concentration for security reasons, few have focused on the natural disasters that could push the world’s largest cryptocurrency network to its knees.

As previously reported by 8BTC, the Sichuan province is notorious for heavy rainfall during the summer, causing massive floods and landslides that have so far displaced millions of people from their homes. And while people and houses have long suffered from the region’s unstable climate, it’s the Bitcoin network that became the latest victim of the weather.

While it’s hard to say how many facilities suffered damages, Bitcoin’s on-chain stats have shown that the network’s overall hashrate dropped by almost a quarter in the past several days. The network’s total computing power reached 140 EH/s on Aug. 14 following Bitcoin’s climb to $12,000. On Aug. 16, the total hashrate dropped to around 128 EH/s. While smaller dips like this are common for the network, few have expected the hashrate to drop to 105 EH/s on Aug. 17. 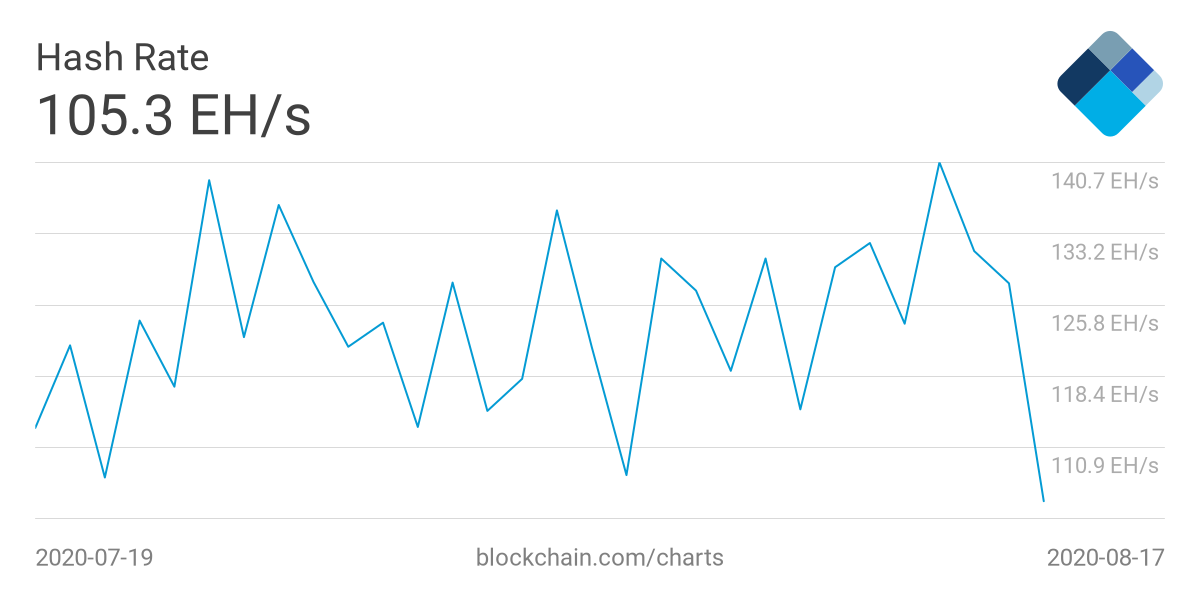 This represents a 25% decline in just four days, a significant hit even for a network of Bitcoin’s size. Data from BTC.com has shown that some pools located in China experienced an ever deeper decline than that—mining pool 58COIN&1THash saw its hashrate drop by 33.5% between Aug. 16 and Aug. 17. Two of the largest mining pools by market share, Poolin and F2Pool, have seen their hashrate drop by 15.99% and 21%, respectively. Antpool and BTC.com, both mining pools with facilities in China, recorded an 8% and 10% decline in their hashrate. 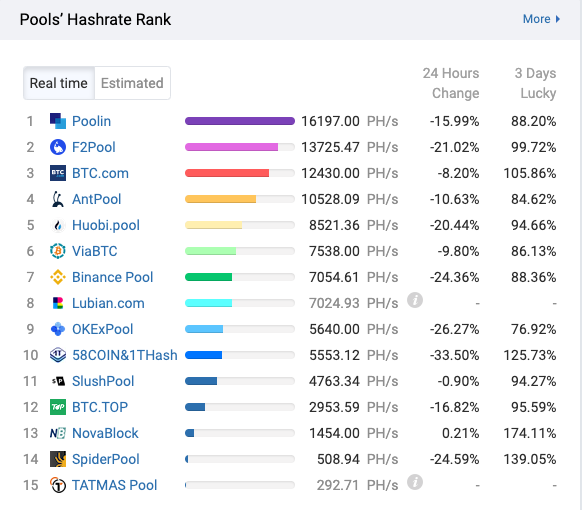 Table showing the 24-hour change in hashrate for the top 15 Bitcoin mining pools on Aug. 17

With so many large facilities forced to close down due to the floods, we could see further declines in Bitcoin’s hashrate. The drop could be further exacerbated by fully operational mining farms choosing to shut down. Kevin Pan, the CEO of Poolin, said in a Weibo post earlier today that some farms have decided to evacuate both their staff and their equipment to minimize losses.