Earlier this month, the crypto industry was caught off-guard when the Bitcoin hash rate, the overall computing power of the network, saw a steep decline in a matter of minutes. Data from various blockchain explorers showed that the hash rate of some of the largest mining pools in China saw a steep decline. Antpool, the largest Bitcoin mining pool in the world, saw its hash rate decrease by 24.5% in 24 hours. Binance Pool, BTC.com, and Poolin saw their hash rates drop by 20%,18.9%, and 33%, respectively.

The mystery of the declining hash rates was quickly resolved when local news outlets began reporting that there had been several major blackouts in Northwest China. Several smaller counties in China’s Xinjiang province experienced a coal mine explosion that caused a major power outage across the entire province, affecting Bitcoin mining operations in the region. According to previous reports from 8BTC, the outages might have originated at the Xinjiang Uygur Autonomous Region Fengyuan Coal Mine. The coal mine was in the process of technical renovation when a sudden flooding incident caused an underground power and communication interruption.

At the time, the explosion was considered a “top level security incident,” according to reports from Dovey Wan, the founding partner at Primitive Crypto. This meant that the power to a large part of major industrial operations in the region had to be cut down so the local government could undergo an on-side inspection.

After more than two weeks of a significantly reduced hash rate, which went on to affect Bitcoin’s price as well, the situation in Xinjiang seems to have been resolved.

According to the latest reports from Colin Wu, a regional reporter posting on the Wu Blockchain Twitter channel, the security inspections in the region have ended. If the original thesis that the hash rate drop was caused by the power outage was correct, then the latest data from blockchain explorer OKLink confirms Wu’s reports. The data shows that the hash rate reached its bottom on April 24th, with the Bitcoin network recording an average computing power of 136.59 EH/s. Since then, the hash rate began its four-day road to recovery, reaching 159.25 EH/s on April 28th. This brings it very close to the 168.50 EH/s the network recorded on April 16th, just before the outages began. 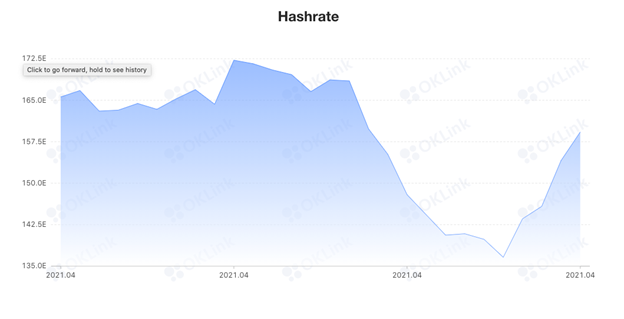 Wu noted that the inspections that took place all around the Xinjiang province weren’t aimed at Bitcoin mining per se. The inspections focused on increasing the overall safety of the electricity grid in the region, he explained.