While there’re still two weeks to go before the end of the first quarter of the year, predictions about Bitcoin’s performance this quarter are already being made.

The economic downturn caused by the coronavirus outbreak has hit the crypto industry hard. However, despite having lost more than $74 billion in the past month, the crypto market seems to have entered a consolidation phase, with most coins experiencing slight growth in the past 24 hours. Bitcoin managed to defend its critical support level of $5,000 and is trading at around $5,200 at press time.

The massive downturn the market has experienced has put the focus of most traders to hourly and daily candles. However, zooming out tends to show a better picture of how Bitcoin has actually been performing and offer valuable insights into where it might be heading.

Bitcoin’s quarterly performance, for example, has been used to show certain trends in the market and help predict how it might act in the following weeks.

If history repeats itself, Bitcoin has a very large chance of experiencing a significant rally in Q2 – the coin only saw a negative return in 2018. 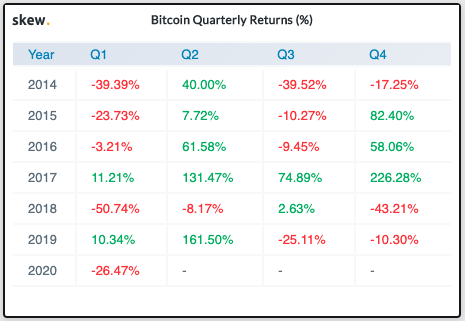 But, diving deeper into Bitcoin’s quarterly performances shows that it might not be that easy to predict how it might behave in the next three months.

While the data might indicate that it’s more probable that Bitcoin will see a rally next quarter, it’s important to note that the circumstances in which it rallied were much different from the previous years.

Earlier this week, the Federal Reserve embarked on an ambitious quantitative easing spree, injecting $700 billion into the U.S. economy to shelter it from the effects of the ongoing pandemic. The Fed has also cut its funds rate, which is used as a peg to many consumer interest rates, to essentially zero.

For Bitcoin, the current economic climate looks a lot like the beginning of the 2008 financial crisis, with many analysts arguing that the world’s first cryptocurrency was made for times like these.