Bitcoin Soared to $9,400 As the Fed Announces More Money to be Printed

After the massive beating Bitcoin took in mid-March, many believed that the coin would see its price gradually increase as its May halving approached. However, as time went by, several sharp spikes showed that the Bitcoin market was extremely sensitive to any news coming out of the U.S. Federal Reserve, its price pumping with the influx of “new money” into the U.S. economy.

And while it managed to hover around the $7,500 mark for almost an entire week, Bitcoin saw huge activity on Apr. 29, seeing its price soar by almost 20%.

According to data from CoinMarketCap, Bitcoin’s price began gaining an upward momentum yesterday morning, with the coin gaining around $1,000 in value throughout the day. Once the coin broke what many believe to be an important psychological barrier at $8,500, it only took a few hours before it reached all the way to $9,300.

The crossing of $9,000 price was followed by the tradition of sharing Vegeta memes which reads “It’s over 9,000” on Reddit. 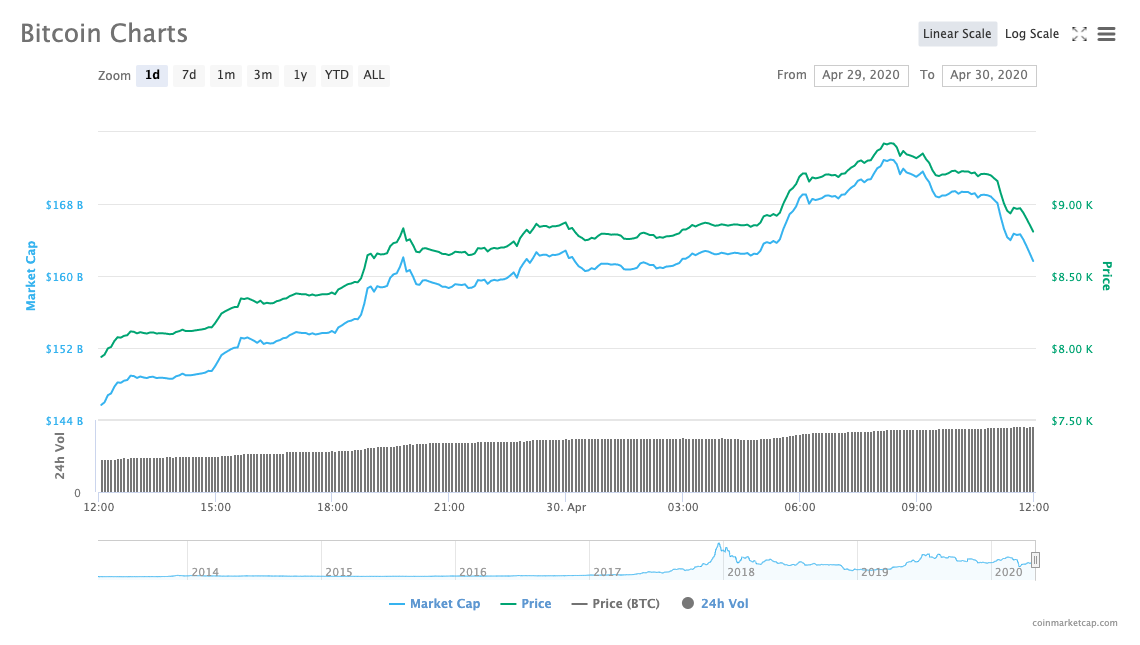 However, traders weren’t able to hold the $9,400 position very long as Bitcoin entered a consolidation phase blowing off steam from the massive upturn. At the time of writing, Bitcoin’s price was hovering at around $8,800 and showed signs that it could consolidate further.

But, even with the sharp drop in price, Bitcoin has still outperformed almost every other asset on the market. The coin’s year-to-date (YTD) returns currently stand at 22%, outpacing the 13% returns gold has posted this year.

Many see Bitcoin’s latest rally as a direct consequence of the statements made by the U.S. Federal Reserve. As an answer to a crumbling economy caused by the coronavirus pandemic, the Fed has been pumping trillions of dollars into U.S. markets in hopes of keeping it afloat.

On Apr. 29, Federal Reserve Chairman Jerome Powell confirmed plans to maintain the country’s current interest rate target between 0% and 0.25%. These measures, Powell said during a news conference, could last a long time.

“The Committee expects to maintain this target range until it is confident that the economy has weathered recent events and is on track to achieve its maximum employment and price stability goals.”

Powell added that the Federal Reserve won’t “be in any hurry” to withdraw these measures until it was confident that the economy is well on the road to recovery. When asked how the Federal Reserve will be able to keep the entire economy afloat during such a long period of time, Powell seemed very confident in the central bank’s ability to print money.

“It’s clear that the effects on the economy are severe,” he conceded. This, however, won’t be a problem, he went on to explain.

“We won’t run out of money. It’s an unlimited pot.”

And while massive market movements such as the one seen yesterday are always influenced by a number of different factors, it’s safe to say that Powell’s statement might have been what pulled the trigger on Bitcoin’s rally.

Various investors are seeing Bitcoin as a hedge against inflation.