While many experts have dismissed the recent rumors around a government crackdown on Bitcoin mining in China, it seems that miners operating in the country have already begun pulling out anticipating the worst.

As instant changes in Bitcoin’s hash rate are notoriously hard to detect and predict, it took several days before the public realized there has been a sudden drop in the overall computing power of the network during the weekend. The most notable decrease was seen last week when the mining difficulty adjusted to 21.05 trillion at block height 685,440 on May 21st. This represents a 16% decline when compared to the all-time-high network difficulty of 25.04 trillion recorded on May 13th. 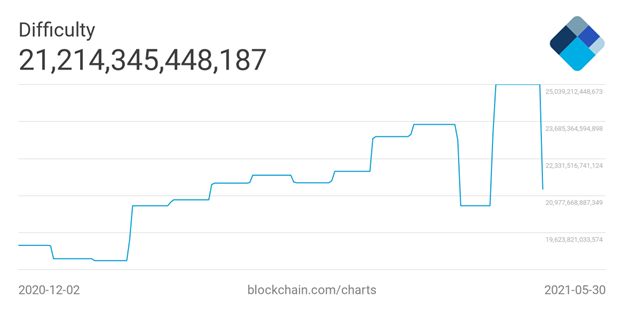 Bitcoin’s average block production time also increased to 11.8 minutes between May 13th, the last mining difficulty adjustment date, and May 21st. On May 21st, the crypto industry was shaken to the core when China’s State Council issued a statement saying better control over Bitcoin mining and trading in China needs to be implemented.

However, digging deeper into the matter shows that miners in China have most likely anticipated bad news from the May 21st meeting and have already begun making plans for migrating out of China at least a week before that. As the block production interval was 18% faster than the intended 10-minute-per-block production time, the average hash rate between May 13th and May 21st already dropped to around 147 EH/s.

According to a report from FXStreet, several large cryptocurrency mining firms and exchanges have already halted their operations in China and have begun a migration process to neighboring Russia, Kazakhstan, and even the U.S. Huobi, the world’s second-largest crypto exchange by trading volume, said that it suspended mining hosting services and the sale of Bitcoin mining machines. This is a significant hit on mining in the country, as Huobi owns the eighth-largest mining pool in the world, contributing 4% of Bitcoin’s total hash rate.

BTC.TOP, another major mining pool, announced it will suspend its business in China and shift to North America to avoid the upcoming government crackdown.

With most reports showing that over 75% of Bitcoin’s overall hash rate is concentrated in China, the latest comments from the Chinese government have sparked concerns over the long-term sustainability of the network. However, with data showing that the industry’s largest players were somewhat prepared for a crackdown and have already begun migrating their farms, many believe that this is a temporary hiccup that will resolve itself in the following weeks.

Another factor to consider is that despite its harsh anti-crypto stance, the Chinese government has never explicitly banned cryptocurrency mining.