Bitcoin Goes Up as Everything Else Goes Down

After experiencing its worst drop since 1987, the stock market has been slow to recuperate. Earlier this week, the Dow Jones Industrial Average futures were off by more than 1,000 points, while the S&P 500 and Nasdaq 100 futures also reached their downside limits. 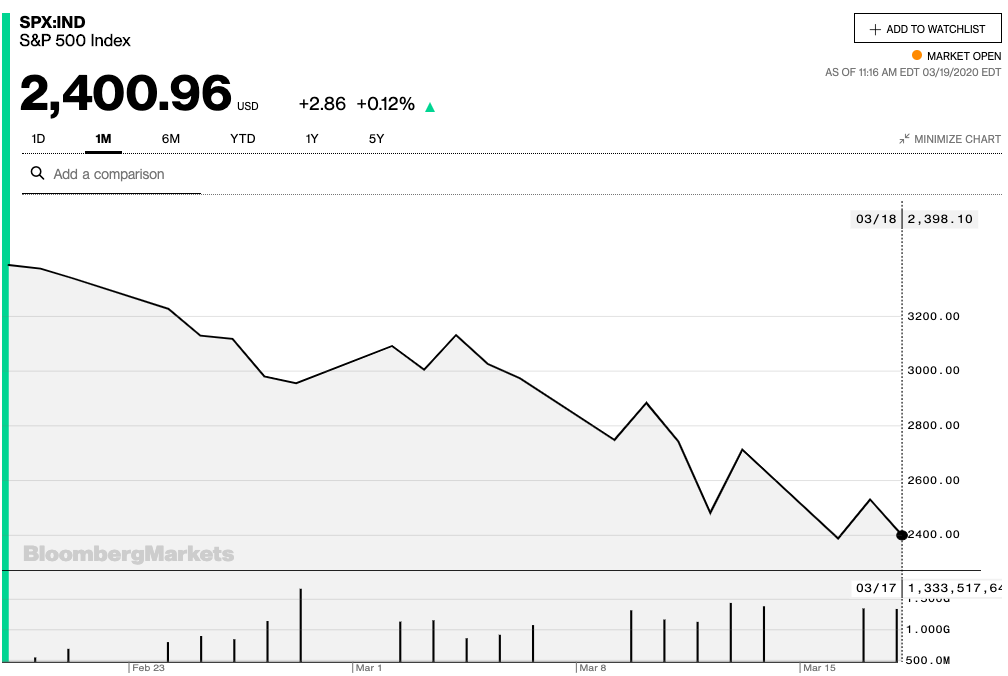 Graph showing the S&P 500 index for the past month.  (Source: Bloomberg)

Not immune to a complete downturn in the global economy, the crypto market also took heavy hits last week and saw more than $74 billion wiped out from its market cap since the beginning of the month. Bitcoin, the world’s largest cryptocurrency, lost more than 40 percent of its value last week, data from CoinMarketCap shown, pulling the rest of the market down with it.

To reduce the panic in the market, stock exchanges in the U.S. began turning on its circuit breakers and The U.S. Federal Reserve embarked on an ambitious quantitative easing spree. More than $700 billion has been pumped into the U.S. economy last week alone, a move which was followed by an aggressive slashing of interest rates.

However, the immense amount of liquidity wasn’t enough to keep the markets from crashing even further.

Wednesday was a particularly bad day for stocks, as both the S&P 500 and Dow Industrial Average dropped 5.18% and 6.30% in a single day. The drops the two experienced on Mar. 18 effectively erased all of the gains accrued since 2017. 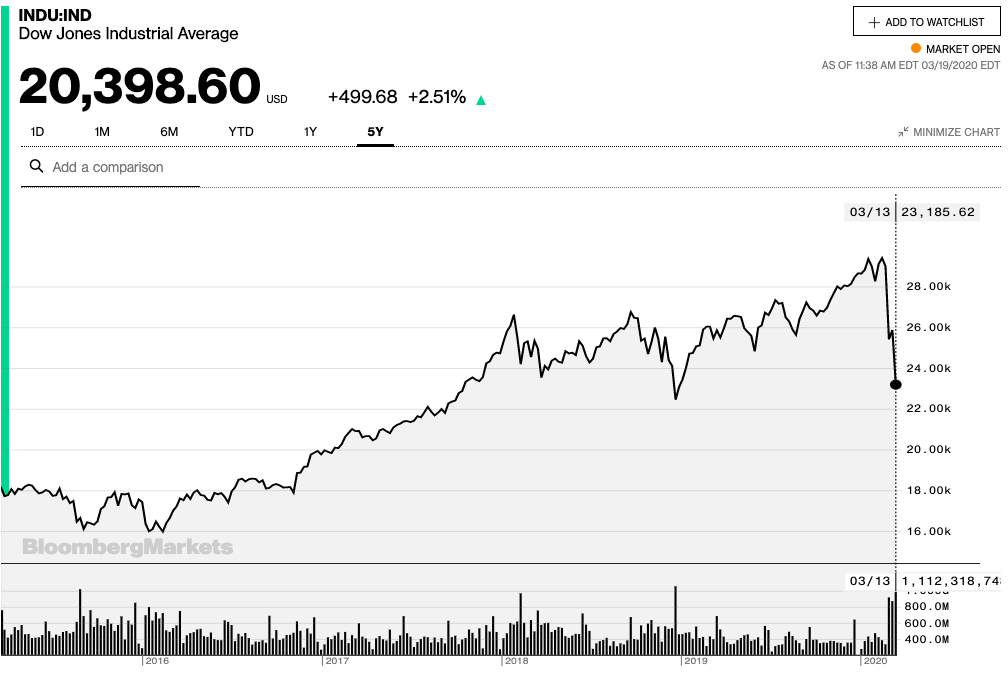 Oil prices fell to an 18-year low on Mar. 18, with the West Texas Intermediate crude falling 26% and Brent crude falling more than 14%. The decline in the oil price was followed by a decline of gold, with the commodity dropping to its lowest settlement since December 2019. 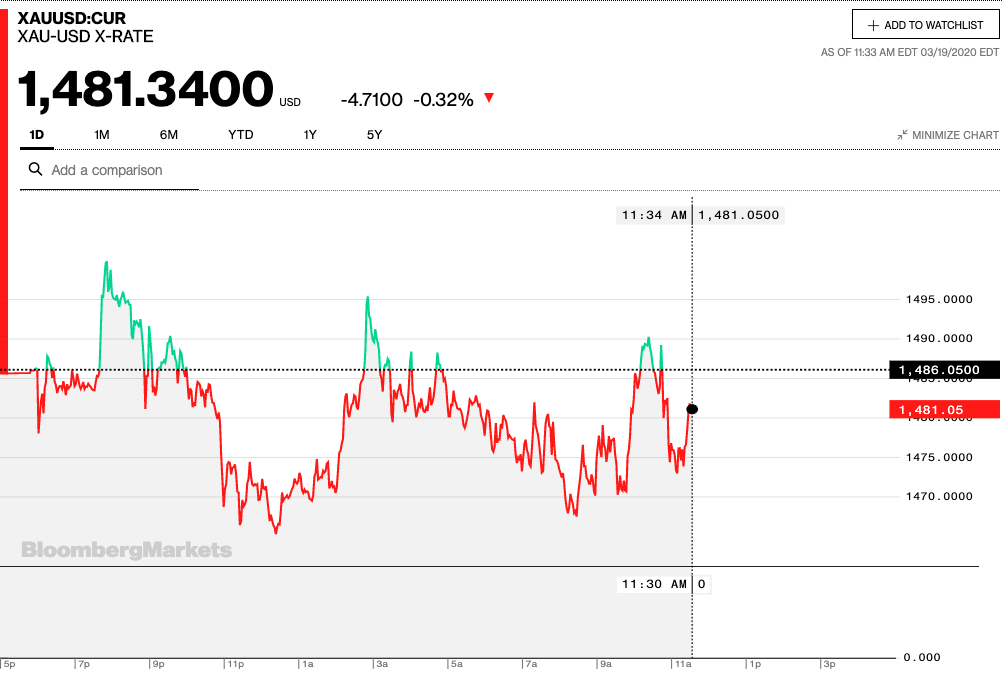 Bitcoin, on the other hand, has entered a strong consolidation phase, managing to reverse the aggressive downturn it experienced last week. The world’s largest cryptocurrency seems to have been invigorated with the Federal Reserve’s liquidity move and is currently trading above the psychological support of $6,000.

Bitcoin has seen its price rise by more than 15 percent in the past 24 hours, according to data from CoinMarketCap, trading at around $6,001 at press time. 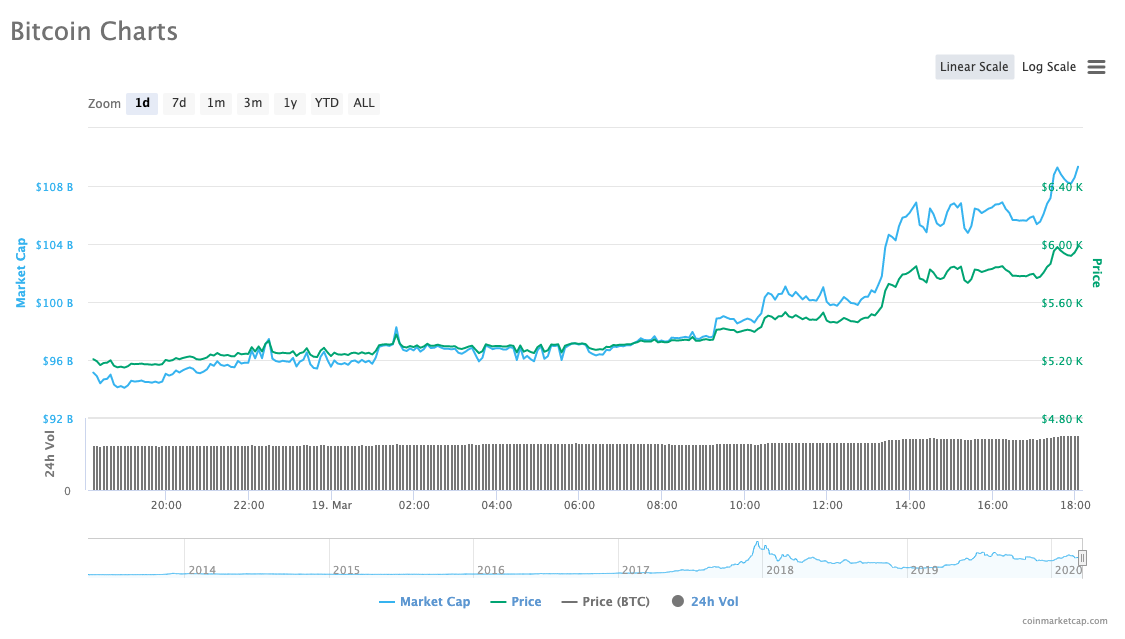 While many suspected that the news about the lack of new coronavirus cases in China was responsible for Bitcoin’s rally, several analysts and industry influencers speculated that the move is a natural response to a crashing market.

Crypto analyst Willy Woo said that he expects a massive rally will follow Bitcoin’s latest flash dump, caused by the market undergoing a flight to safety. “It’s this economic environment in the years ahead that Bitcoin was built for,” he said.

Tyler Winkevoss, the co-founder and CEO of the Gemini exchange, pointed out yesterday that Bitcoin was the only asset that was going up for the day, indicating that its flash dump might finally be over.