Bitcoin Cash Halving Set for Tomorrow, But it Might Not be Bullish at all

While Bitcoin’s halving has been one of the most heavily discussed topics in the crypto industry, the reduction in block rewards is set to hit Bitcoin’s offshoots as well. With less than 24 hours to go before the mining reward for Bitcoin Cash decreases from 12.5 BCH to 6.25 BCH, it’s important to know why the event itself matters to the crypto space.

A halving is an event characteristic for Bitcoin and its hard forks, as it reduces the number of coins per block in order to maintain a fixed supply of 21 million coins. When it comes to Bitcoin Cash, the next halving is set to happen at block 630,000, which according to current metrics, will be produced on Apr. 8, 2020. The event is often seen as a sort of “trial run” for Bitcoin, whose own halving is set to happen on May 13.

Many believe Bitcoin’s halving will push its price up and cause a much-needed bullish rally, but predictions for Bitcoin Cash are much less optimistic. According to data from Coin Metrics’ State of Network report, BCH halving could push miners to capitulate and move to other more profitable networks such as Bitcoin.

As the entire crypto market has taken a huge hit in mid-March, prices of most coins are yet to recover and return to levels that make mining actually profitable. Coin Metrics concluded that there’s a high chance BCH miners would move en masse and redirect their hash power to Bitcoin, as the network will have a 12.5 BTC reward until May 13.

Aside from a massive reduction in hash power, such a large-scale migration could also have a negative impact on market sentiment. Many traders could sell off their BCH positions if the general sentiment towards the cryptocurrency has turned negative.

Last week, the BCH community was plagued by bad news as it was discovered that most of the staff at Bitcoin.com, a one-stop shop for everything BCH-related, has been laid off. According to data from tech professional network Candor, Bitcoin.com has let go around 50% of its team, while the CEO of the website has reportedly resigned. While it’s worth noting that Bitcoin.com is just one among many crypto companies that have been laying off its workers to cope with the COVID-19 pandemic, the news will nonetheless have a huge impact on the market.

This can already be seen in the coin’s price, which has been struggling to break the key resistance of $270, which has provided crucial support earlier this month. Despite seeing a 22% loss in the past 30 days, BHC managed to regain over 16% back in the past 7 days. We are yet to see whether it manages to break the resistance levels set earlier this month and enters into a flash rally in the hours before the halving. 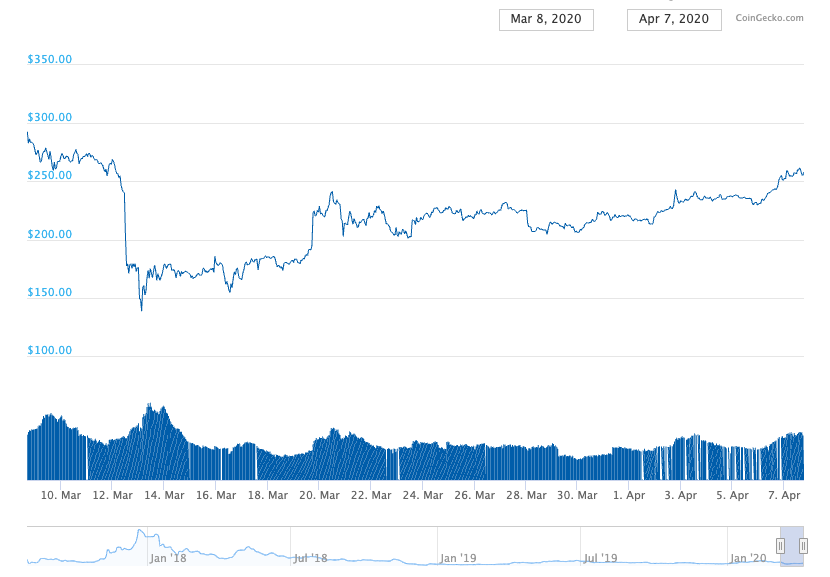