BIS: To Succeed, CBDCs Need to Focus on Convenience

While tokenizing national currencies could be the solution to the world’s financial woes, central bank digital currencies (CBDCs) need to compete with both cash and payment operators such as Visa and PayPal.

This is the main take from the quarterly report from the Bank for International Settlements (BIS), published on Mar. 1. The global financial institution, tasked with overseeing the works of 60 central banks, took a deep dive into the future of payments, putting central bank digital currencies (CBDCs) under the spotlight.

The fact that the Swiss-based organization dedicated almost an entire report to digital currencies is an achievement in itself for the industry. Apart from concrete solutions on improvement the research-heavy report suggests, it also offers the new asset class much-needed visibility.

Hyun Song Shin, the head of research at BIS, said that the rapid pace of change and “potential for disruption” are making new types of payment systems a priority for policymakers across the world. This, BIS noted in the report, is precisely why it went so deep on the issue this quarter.

“The most transformative option for improving payments is a peer-to-peer arrangement that links payers and payees directly and minimizes the number of intermediaries,” he said in the introduction to the report.

“Central banks have a core role in payment systems, and the changes underway require them to step up and play a more significant part in improving the safety and efficiency of these systems.”

Tokenizing securities, or in this case fiat currencies issued by national banks, would streamline settlement processes and create a faster, more organized market.

However, a more efficient settlement system will come at a cost and central banks will have a tough time marketing CBDCs to consumers, researches found in the report.

First off, the report found that fast settlements enabled by distributed ledger technology (DLT) might not be beneficial to most traders. BIS explained that the liquidity requirements would increase proportionally to the increase of settlement speed. Traditional settlement systems offer a feature called netting, which means that they can offset the value of multiple positions set to be exchanged between parties. This means that less cash is needed to settle multiple positions, which reduces the network’s need for liquidity.

However, blockchain-based payments settle immediately and can’t be netted, which increases the network’s liquidity needs. A central bank digital currency would face significant challenges in achieving such liquidity, BIS researchers found in the report.

“Market participants might not want to move to shorter settlement cycles, as this could increase liquidity requirements and give market-makers less time to source the cash or securities needed for settlement.”

Apart from that, the second, equally important issue CBDCs will have to face is convenience. BIS noted that putting in the resources to develop digital money would be pointless is said digital money couldn’t compete with existing systems.

Researchers Auer and Böhme identified scalability, accessibility, convenience, resilience, and privacy as features that a central bank needs to have in order to become a trusted and widely used medium for retail payments.

“A trusted and widely usable retail CBDC must be secure and accessible, offer cash-like convenience and safeguard privacy,” the report noted.

The most deeply explored approach to CBDCs was their use in retail. The innovative approach allowed BIS researchers to start building a CBDC concept by starting from consumer needs. Graphically represented in the “CBDC pyramid,” the approach maps four main design choices central banks could employ when developing their digital currencies. 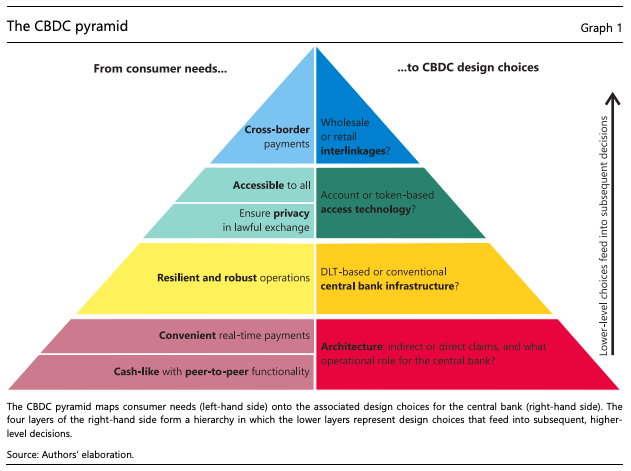 The CBDC pyramid, via BIS

While the report raised more questions than it set out to answer, it provided an incredibly useful guideline for all future central bank digital currencies. Out of the 17 retail-focused CBDC projects highlighted in the report, the one currently being developed in China has the biggest potential to succeed. It was the only project that doesn’t seem to be addressing any issues in terms of research and is instead focusing on concrete technical development.