As the Bitcoin block reward halving has come and gone, the crypto industry has braced for the sharp market turnover many have expected to follow such a monumental event. Experts and analysts have been racing to give their predictions on how the market would react to the halving of block mining rewards, with most agreeing that there would be a significant reaction, no matter which side of the price spectrum it tipped to.

However, three days after the halving, Bitcoin’s price remained unusually stable, hovering around the $9,000 mark without any major indication that it might rise or fall. And while the market gained huge momentum on May 14, with BTC jumping almost to $9,700, no major price swings happened immediately before or after the halving.

With its price relatively stable in the days following the halving, many have turned their focus away from Bitcoin and dove deep into other parts of the crypto market, mainly DeFi and stablecoins, to see whether or not the halving affected them too.

During this time, something rather interesting was happening on cryptocurrency exchanges—a trend that could be a major bullish indicator for the industry.

According to data from CoinMetrics, almost 200,000 BTC has been withdrawn from two major exchanges since the Mar. 12 crash, with the withdrawal speed seemingly increasing in May. 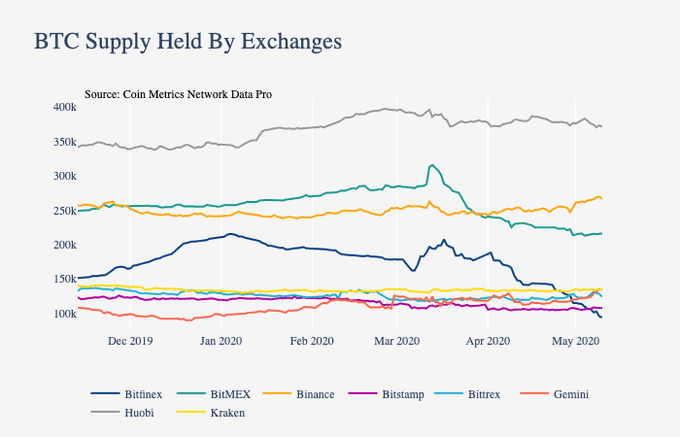 Graph showing the BTC supply held by cryptocurrency exchanges from Dec. 2019 to May 2020.  (Source: CoinMetrics)

Other exchanges such as Kraken, Bittrex, Gemini, Bitstamp, and Huobi have had a more or less stable supply of Bitcoin throughout 2020.

Many have seen this massive drop in the Bitcoin supply on exchanges as a bullish sign. Ever since the major market crash in mid-March, there has been a trend of Bitcoin being withdrawn from exchanges en masse. Lopp said he “hopes” that the trend shows that more and more traders have begun shifting their Bitcoin funds to cold wallets.

Ross Middleton, the CFO of DeversiFi, said that it was interesting that the outflows of Bitcoin from both Bitfinex and BitMEX haven’t landed on any other exchange—a view that’s in line with the cold wallet theory.

The interesting thing is that the outflows haven’t landed on any other exchange. Bullish https://t.co/gK7rKx11lB https://t.co/D5xOgm5gKa

This trend has been going on for quite a while but seems to have been exacerbated by the halving. Data from cryptocurrency analytics platform Glassnode showed that in the hours before and after Bitcoin’s halving, exchange net flow decreased significantly. 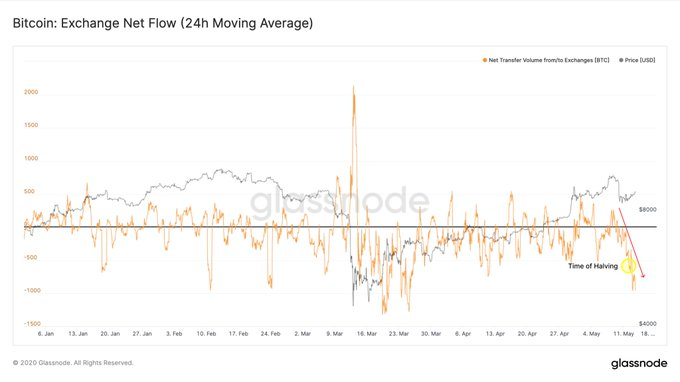 We are yet to see whether this withdrawal trend continues as we move further away from the halving. With Bitcoin’s price changing by the minute and the market still in a very volatile state, it’s hard to predict whether or not this trend will continue.