2020 Market Crash Shows Bitcoin Will Prevail Over Other Industries

The market crash that has left most of the world in shambles has not only shown how fragile certain industries are when faced with a global pandemic but also revealed some of the deeper inefficiencies that have been plaguing the market for decades.

A reduction in profits seen by the tourism and hospitality sector was something everyone expected, but few could have predicted that their downfall would take everything else with it.

Cryptocurrencies, on the other hand, have shown an incredible amount of resilience when faced with the prospect of a global recession. Matt D’Souza, the CEO of mining solution provider Blockware, believes that cryptocurrencies, and Bitcoin in particular, will be the thing that survives the ongoing market downturn.

In a Twitter thread, D’Souza dove deep into the problems and issues many of the heavily hit industries face, saying it revealed all the ways those industries can be disrupted.

“The 2020 Market Crash has revealed that our society and many industries are vulnerable and failure prone. This introduces possibilities for disruption,” he wrote.

To illustrate his point, D’Souza shared a table showing the losses some of the largest companies today have faced. His data, showing the year-to-date percentage change in each of their performance, reveals that tech has been thriving while other industries and sectors went down. 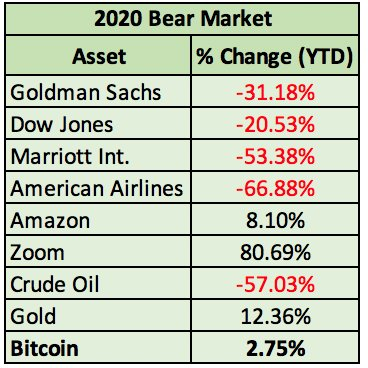 While most assets perform well in a bull market, bear markets expose the real inefficiencies and reveal where the potential opportunities for disruption are. “The beauty of nasty bear markets is that the junk never comes back,” D’Souza said.

Most are expecting a global liquidity crisis to hit soon, he went on to explain, adding that assets across the board are being stress-tested in the current environment, with Bitcoin not being an exception.

However, zooming out shows that Bitcoin’s earnings and other fundamentals have been historically very resilient to bear markets. D’Souza illustrated this through data that showed how difficulty reductions influenced Bitcoin’s price throughout the year.

Bitcoin’s decentralization will be what allows it to get through the bear market, D’Souza said. The centralization issues regarding oil have disrupted the entire industry, while other leading companies whose models are highly centralized, such as those in the hospitality and tourism industries, will not survive the market crash without heavy government intervention.

Bitcoin, on the other hand, is based on a peer-to-peer network that has deterred disruption, as miners and mining pools continue to hash out and get paid every day despite current market conditions. With nodes continuing to validate transactions, transactions on the Bitcoin network are “business as usual,” D’Souza said.

According to him, this is due to the fact that miners always focus on assets with a long-term life cycle that can’t be repurposed or liquidated quickly. With most mining facilities having a life cycle longer than 5 years and rigs taking around 18 months to become profitable, a short-lived bear market will have little effect on the network as a whole.